Sunday morning I was able to witness my spicebush swallowtail emerge and spread his wings, and the same afternoon I was startled by some sudden scratching noises, and when I inspected my bug cage, a very large slug-looking "thing" was clambering over the other cocoons.  I quickly realized a female polyphemus moth (Antheraea polyphemus) had just emerged from her cocoon, so I scrambled to find my camera and wound up taking over 160 photos of her, most of which show 30-60 second intervals of the wing-expansion process.  While the spicebush swallowtail only took 15-20 minutes to fully expand his wings, large silk moth species frequently take 30 minutes to an hour to fully expand and dry their wings, and this polyphemus moth spent about 30-40 minutes.

Polyphemus moths are found in every state except Nevada and Arizona, and of course Hawaii and Alaska.  In northern states, they emerge in mid to late spring, and only have one brood per year. In southerly states, adults have been found in almost every month of the year, and there are often two to three broods per year.  Larvae feed on oak and maple, and the large green mature caterpillars may be seen crawling across lawns and parking lots in late summer looking for a place to spin their cocoon and overwinter.
I won't overload this site with an entire series of the photos I took, but here are a few that best show the complete process from emergence to flight.  To give an idea of scale, the cocoon is approximately 1.5 inches long, and the adult wingspan is about 5 inches. 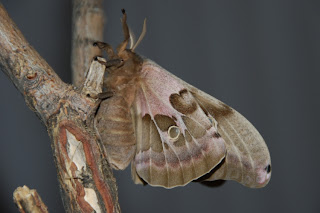 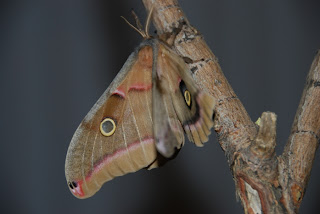 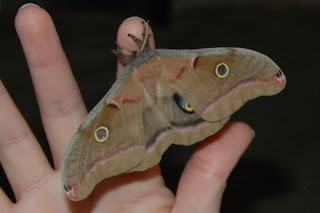 Posted by Caitlin LaBar at 9:35 PM No comments:

One of the two spicebush swallowtail (Papilio troilus) pupae began darkening two days ago (photo on the left), and this morning I knew it was close to emerging because I could see the spots on the front wings through the chrysalis (photo on the right).

It only took about fifteen minutes for it to completely expand its wings.  The scales on the hindwings are highly reflective, and appear more green in photos using a flash. The last two photos shown here were taken in bright light without a flash, so the blue scales don't appear quite so silvery.  The marginal spots are frosty sage green above, and bright orange rimmed in pale yellow below. 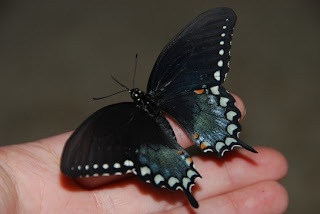 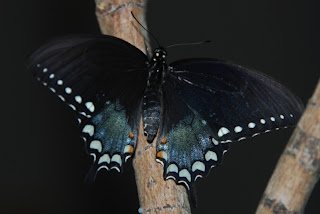 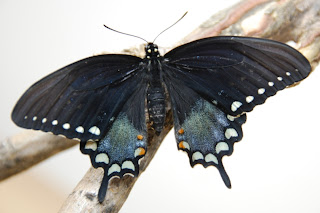 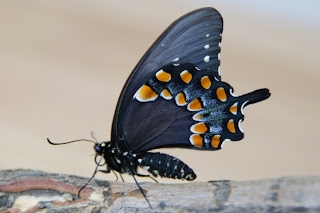 Spicebush swallowtails range from southern Canada into Florida, and from the east coast of the US to Oklahoma and eastern Texas, occasionally straying further west.  Larvae feed on spicebush (Lindera benzoin) and sassafras trees.
Posted by Caitlin LaBar at 2:15 PM 1 comment:

Not so giant swallowtail

Yesterday I noticed that one of the two Papilio cresphontes (giant swallowtail) chrysalids was starting to show wing color, so I knew it was a matter of hours before the butterfly would emerge.  When butterflies are close to emerging, the chrysalis appears to darken or change color, but it has actually become semi-transparent, and what you are seeing is the adult butterfly.  Often, you can see the spots or stripes on the wings or body.  This photo shows the difference between the two swallowtail chrysalids I have - the yellow bands on the black wings are visible, as well as a yellow stripe down the side of the abdomen, compared to the other chrysalis which is still mostly green and brown. 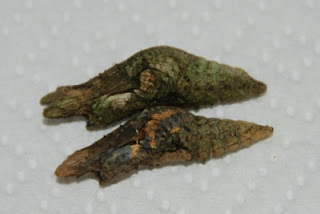 This morning, I awoke to find the swallowtail beginning to flutter about in the cage.  With a wingspan of only 4 inches, he is on the small side for a butterfly that can have up to a 6.25 inch wingspan and is the largest butterfly species in North America.  Giant swallowtails feed on trees and plants in the citrus family, and as such, can sometimes become pests in citrus groves.  It ranges throughout the eastern United States, but is most common in the southeast, and has been spreading to California in the orange groves.
The left hindwing is slightly damaged as you can see in these photos. There are a number of possible causes for that, including insufficient nutrition as a larva, rapid temperature fluctuations during adult development, or simply an obstruction when emerging from the chrysalis or while pumping and drying the wings.

I was welcomed by two more luna moths yesterday when I arrived home from work. A beautiful female appeared to have emerged earlier in the day, and a handsome male had just emerged minutes before I walked in the door, so I was able to see and photograph his crumpled wings being unfurled.  I should note that these individuals have all been around the average size for luna moths (4 inches), but the two that I had a few years ago were much smaller (2.5 to 3 inches), so it is fun to see such large, luminescent beauties clinging to my hand.  I've always been fascinated with luna moths ever since I first saw pictures of them, and I never tire of how exquisite they are, right down to their lilac-colored legs.
There is one more luna to eclose (the term for adults emerging from the pupa, "hatch" technically only applies to larvae hatching from eggs).  See my earlier blog entry for the other moths that have yet to make an appearance.
Notice that the female's antennae are much less feathered than the males.  They do not need to detect scents as much as males, who use their antennae to find the females. The female's abdomen is also much larger, as she is carrying 150-250 eggs.  Remember to click on photos to see full view. 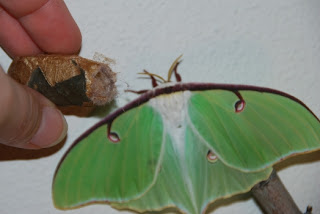 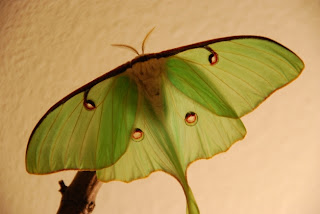 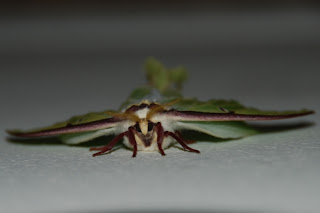 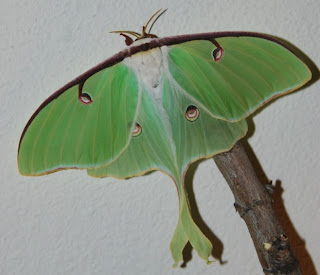 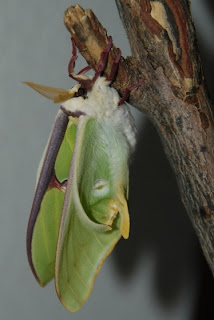 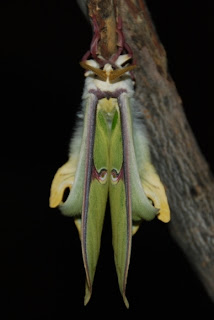 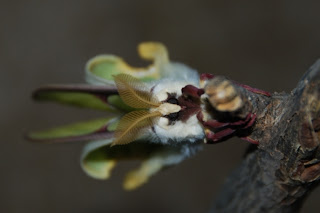 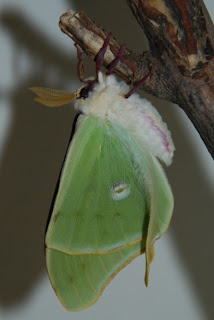 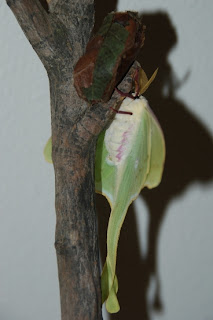 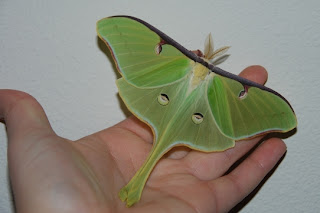 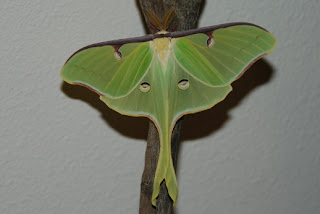 The weather has been gradually warming lately, which has made me start thinking about when I should take my cocoons out of the outdoor closet to keep a closer eye on them. Usually these moths emerge in May and June, but in warmer climates may emerge as early as late March or April.  My storage closet is a bit warmer than the natural outdoor temperature, but I was still surprised when I opened the door this morning and was welcomed by a newly emerged luna moth! Click on the photos to see the larger version. 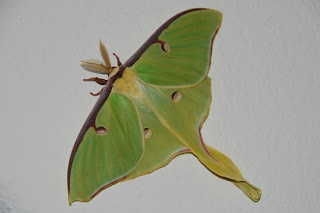 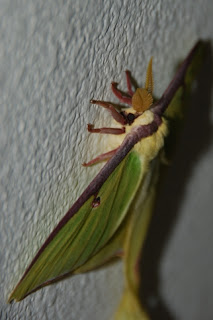 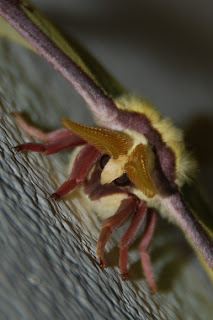 Another luna cocoon is rustling, and will likely emerge in the next day or two.  Check back for more, hopefully soon!

Posted by Caitlin LaBar at 1:40 PM No comments:

Greenies, emerald gems of the scrubland

Green hairstreaks, or "greenies" as many lepidopterists call them, are small, rather dull-looking butterflies at first glance, but have beautiful emerald green scaling on the underside of their wings.  There are four species in the northwest, but these are in dispute as to which should be separated or lumped into new or existing species or subspecies. The two species found in the eastern sage-steppe of WA and OR, are Callophrys affinis (western green hairstreak) and Callophrys sheridanii (Sheridan's green hairstreak).  These two butterflies are often the first to emerge in the spring before other butterflies.  It is difficult to differentiate between the two, but Sheridan's is usually smaller, has more black scaling on the underside, and the white line on the VHW (ventral hind wing) is often more prominent than in the western green hairstreak.  The white line is sometimes missing in the western green, as seen in the following photo.  In older individuals, the green scales may be partially or mostly worn off, such as with the individual on the far left in the photo.
Their perching habits also differ, in that the western green hairstreak tends to perch on and fly from the tops of shrubs, while Sheridan's tends to perch on and fly very close to the ground.  The larvae of both species feed on buckwheats (Eriogonum), including Eriogonum umbellatum and E. heracleoides. Western green hairstreak larvae feed on the flowers, while Sheridan's green larvae feed on the leaves.  The pupae overwinter, and the adults emerge as soon as the weather begins to warm up in the spring, usually in March for lower elevations, and as late as June or July at higher elevations.

The following photo is of a greenie I caught in a meadow on Red Top Mountain in Kittitas County last July. This is one of those cases where it is difficult to determine which species this is, particularly since I and the group I was leading found one of each on that day, but I don't have a photo of the other individual, and can't remember which species we decided this was. See if you can figure it out! 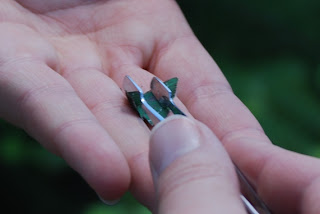 Posted by Caitlin LaBar at 5:47 PM No comments:

The daffodils outside my office are about to burst open in golden glory, and in thinking about the fast approaching spring, I thought I'd post some photos that illustrate the things I look forward to. Enjoy!

Posted by Caitlin LaBar at 9:13 PM No comments:

A short anatomy lesson this morning.
All insects have six legs, three main body segments (head, thorax, abdomen) and a pair of antennae.  All wings and legs are attached to the thorax.  Spiders are commonly confused with insects, as both are arthropods, but spiders have eight legs and two main body parts: cephalothorax and abdomen.  Insects belong to class Insecta, and spiders belong to Arachnida.
Most insects have wings of some sort, but these vary in number. Some insects with wings are flightless, others have wings that function as protective coverings, such as beetles. The beetle order "Coleoptera" means "sheath wing", and refers to the outer set of hard wings that protect the body and cover the second set of wings used for flight.  Other types of wings include the "scaled wings" of butterflies and moths, which are covered in tiny overlapping scales that create beautiful wing patterns and provide camouflage or warning colors for the insect.
An insect's mouth parts are extremely variable depending on the species, and indicate a lot about its lifestyle.  Carnivorous insects generally have either large mandibles to be used in grasping and chewing their prey (e.g. many beetles), or piercing mouthparts used to inject paralyzing toxins into their prey and to suck out the food (e.g. assasin bugs, water boatman, mosquitoes).  Butterflies and moths have a long proboscis, which is like a flexible straw, and enables them to sip nectar from flowers and fruit, as well as minerals from moist soil.  Some adult insects do not have any functioning mouth parts, and therefore do not feed and only live for a few days, just long enough to mate and lay eggs.  For example, many moths in the giant silkmoth family Saturniidae are without mouth parts.

Posted by Caitlin LaBar at 9:38 AM No comments: