This post is partially recycled from an old post four years ago. Late March through April is the perfect time to see these little emerald gems flitting about in the scrublands of central and eastern Washington and Oregon.

Green hairstreaks, or "greenies" as some lepidopterists call them, are small, rather dull-looking butterflies at first glance, but have beautiful emerald green scaling on the underside of their wings. There are currently three species recognized in the northwest. Bramble Green Hairstreak (C. dumetorum) is primarily found west of the Cascades in the Puget prairies and Willamette Valley and coast ranges. Sheridan's Green (Callophrys sheridanii) and Western Green (C. affinis) hairstreaks are found in central and eastern Washington and Oregon, primarily in sagebrush-steppe habitats.

These butterflies are often the first to emerge in the spring before other butterflies. It is difficult to differentiate between them, but in general Sheridan's is usually smaller, has more black scaling on the underside, and the white line on the VHW (ventral hind wing) is often more prominent than in the Western and Bramble green hairstreaks. The white line is sometimes missing in the Western and almost always missing in Bramble green hairstreaks. In older individuals, the green scales may be partially or mostly worn off.


Their perching habits also differ, in that the Western Green Hairstreak tends to perch on and fly from the tops of shrubs, while Sheridan's tends to perch on and fly very close to the ground. The larvae of both species feed on buckwheats (Eriogonum), including Eriogonum umbellatum and E. heracleoides. Western Green Hairstreak larvae feed on the flowers, while Sheridan's Green larvae feed on the leaves. The pupae overwinter, and the adults emerge as soon as the weather begins to warm up in the spring, usually in March for lower elevations, and as late as June or July at higher elevations.

Bramble Green Hairstreak (Callophrys dumetorum)
I'm less familiar with this species and haven't worked up a description for it yet, so I'll leave you with these photos and point you to the field guides listed on the Recommended Books page (left-hand column on your screen). This species only overlaps with the other two species in Klickitat County and possibly Skamania County and southern Yakima County. If you see a green hairstreak west of the Cascades, it is this species. If I understand correctly, one of the identifying features is that the white line, when present, is curved across the wing (especially note the forewing white dashes), rather than nearly straight as in the following two species.

Sheridan's Green Hairstreak (Callophrys sheridanii)
Wingspan: 19 to 22 mm
Male: dorsal is light charcoal gray to gray-brown, with small gray stigma in cell of DFW.  Ventral is yellowish- to bluish-green with a thin black margin and a postmedian white line across each wing, occasionally broken or faint.
Female: same, but without stigma on DFW.
Egg: greenish-white.
Larva: first instar is pale green.  Later instars are variable, ranging from bright green with yellowish-white stripes to pale green with white and dark magenta dashes and stripes.
Pupa: reddish-brown with darker markings.

Spring is unfolding in the northwest! I haven't seen any butterflies yet, but a few moths are starting to pop up, such as these (unidentified) nectaring on Columbia Desert Parsley (Lomatium columbianum) in Klickitat Canyon. 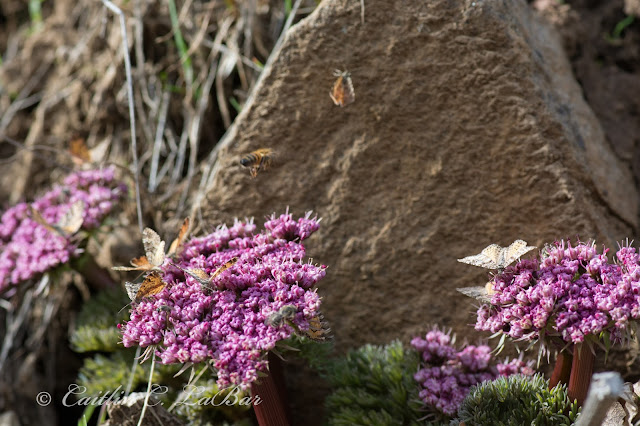 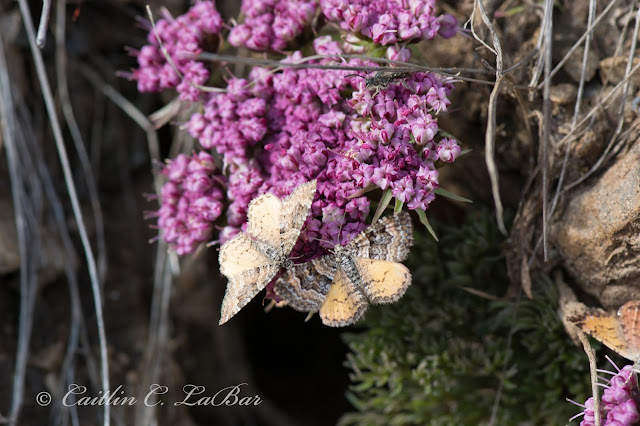 For those of you waiting for my book to be finished, which I was estimating to be this spring, it is getting close but still have a little ways to go. Still hoping for sooner, rather than later, this year!
Posted by Caitlin LaBar at 10:56 AM No comments: