Posted by Caitlin LaBar at 10:11 PM No comments:

On May 14 (last Tuesday), exactly one week from when the larva pupated, this gorgeous Lorquin's Admiral emerged.  This is from the larva I found during my trip to the Deschutes River Canyon the previous week. 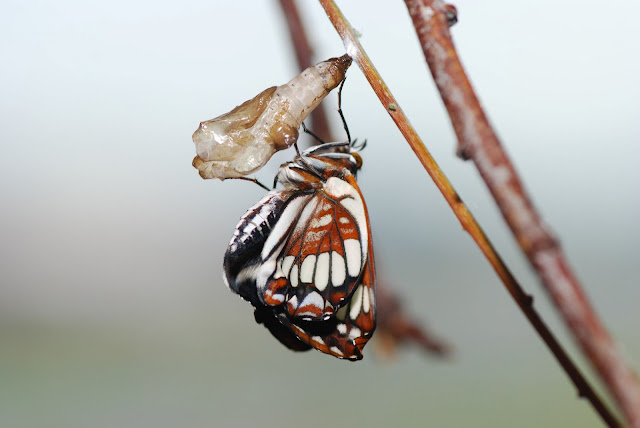 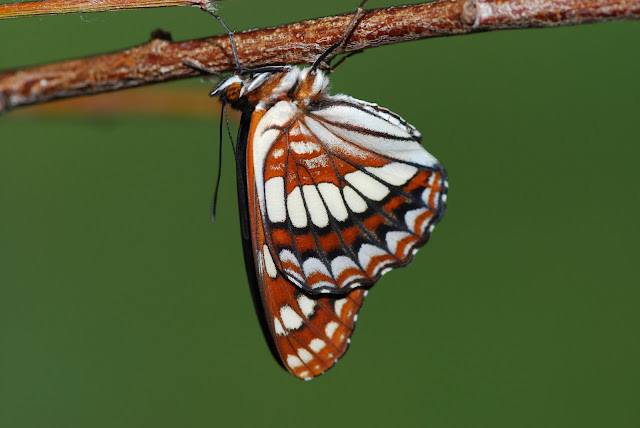 Yesterday, May 4, I spent the day exploring the Deschutes River Canyon in the recreational area north of Sherar's Bridge (north of Maupin and south of The Dalles) in Oregon.  I arrived around 10:30am and the temperature was already up to a warm 72F.  By the time I left around 3pm, the temperature had climbed to 84F, although a few places I stopped at had registered 88F.  It was very breezy all day with frequent gusts probably up to 30mph, which made photographing very many plants and butterflies rather difficult, but I still managed to get a nice species list. The highlight was finding a Lorquin's Admiral (Limenitis lorquini) caterpillar on coyote (aka sandbar) willow (Salix exigua).  Although I see many adult Lorquin's every year, this is the first larva I've seen of that species.  Also, unless I'm much mistaken, I think I saw a Monarch go zipping by in the wind. The glimpse I had was only a second or two, but it looked as big as a swallowtail and glinted orange in the sun, so I'm not sure what else it could have been.
Update 5/6/2013 - a local butterfly expert who studies monarch migration affirmed that monarchs have been seen moving northward much more rapidly this year than in recent history, so what I saw was very likely one of the first to arrive in this area this year.
Species list for the day:
Pholisora catallus - Common Sootywing x5
Hesperia juba - Juba Skipper x7
Papilio zelicaon - Anise Swallowtail x1
Papilio indra - Indra Swallowtail x3
Papilio rutulus - Western Tiger Swallowtail x1
Papilio multicaudata - Two-tailed Swallowtail x1
Colias sp. - unidentified sulphur (flew by in the wind)
Pontia beckerii - Becker's White x8
Plebejus melissa - Melissa Blue x1 slightly-worn male
Plebejus lupini/acmon - Lupine/Acmon Blue x9 (fresh males, all associated with Eriogonum compositum)
Plebejus icarioides - Boisduval's Blue x4 (all fresh males)
Nymphalis antiopa - Mourning Cloak x1
Limenitis lorquini - Lorquin's Admiral, 1 larva
Coenonympha tullia - Ochre Ringlet 10+
Danaus plexippus - Monarch x1

For reference, the Lorquin's Admiral caterpillar is a little over an inch long, and yes, it is supposed to look like a bird dropping!