Reviewing the past while looking forward

Happy New Year!
I thought I'd kick off the new year by sharing a snippet of the books that fed my early interest in bugs. There were lots of books along the way, such as every insect-related book at the local library!
Possibly the first bug book I ever owned is one I had forgotten about until last week when it was uncovered while helping my mom clear out an old cupboard. It came with a little clear plastic case with a green lid for capturing and observing bugs. I was around 5-7 when I had this book, it and the "bug bottle" were well-used! 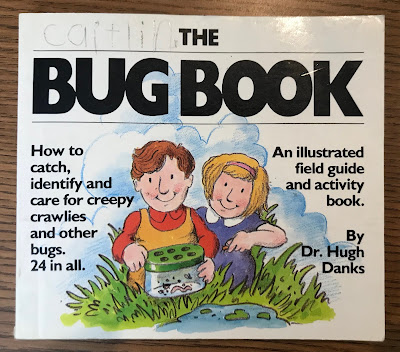 Next up, these were "family books", but as I was the one who used them all the time they came with me when I moved. They cover the entire US, so were too general to allow me to identify every single Pacific Northwest species in my backyard, but I was able to learn the groups and it whetted my appetite for more. 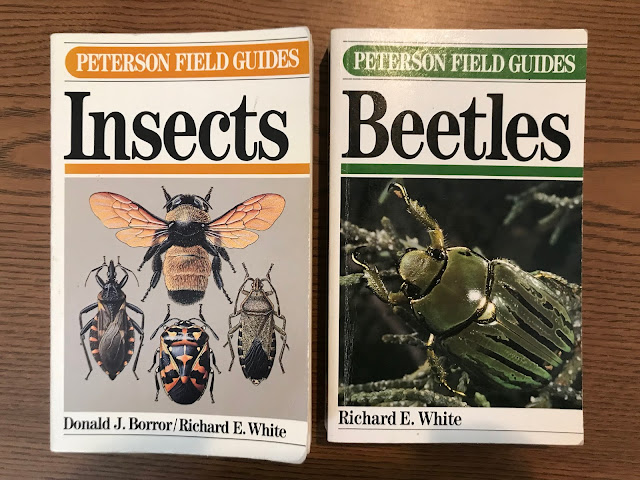 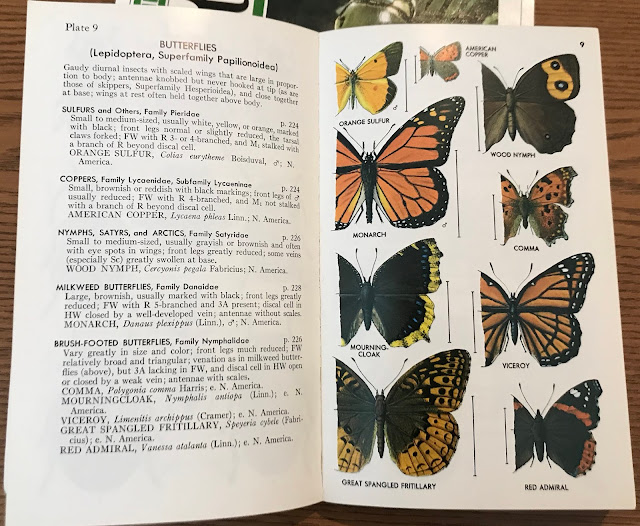 This was my first personally-owned "big-person bug book"... I still distinctly remember taking it off the shelf at Barnes & Noble in Bellevue and flipping through all the pictures, excited to see they were all color photographs! If I remember right, I was about 7-8 and it was the book I chose after either a dentist or doctor's appointment (Mom would reward my sister and I with a new book for good behavior after getting our shots or a trip to the dentist :) It still wasn't focused on the Northwest, but it helped encourage my interest even more. 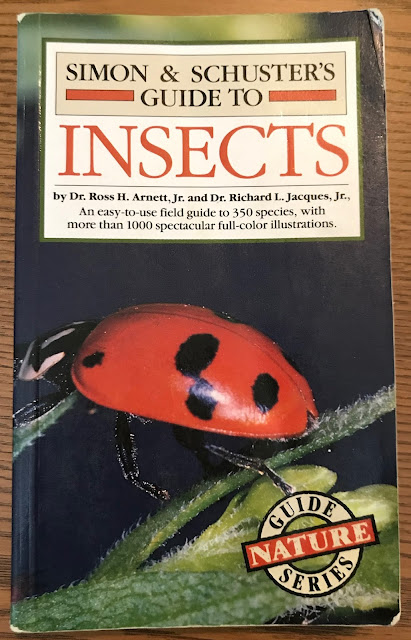 I don't remember where or when exactly I acquired this book, but I was probably younger than ten and Mom wrote my name inside the cover in her pretty handwriting. It became my go-to butterfly book through my elementary and high school years, until I purchased Butterflies of Cascadia and other books I currently use. Somehow I never paid attention to who the author was until after I discovered the "butterfly people" (WBA and LepSoc) and learned about Bob Pyle, then realized I already had one of his books! He signed it while visiting me for the first time at my apartment in Vancouver, WA while I was finishing up grad school. 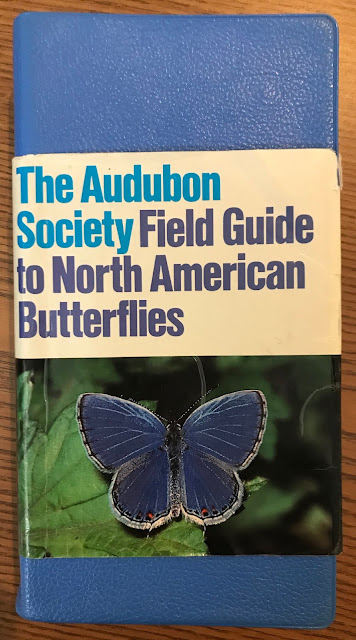 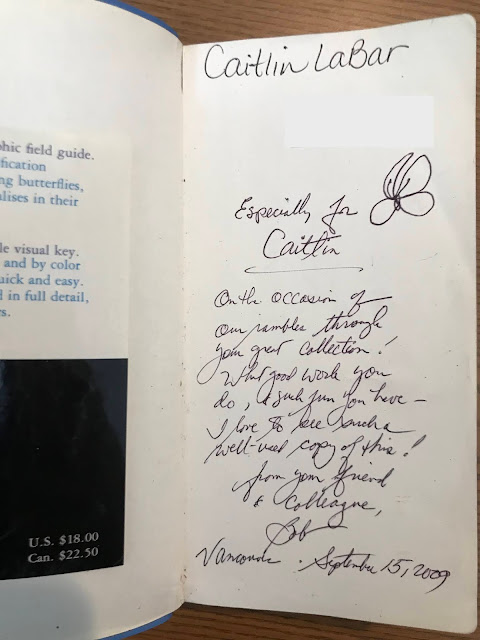 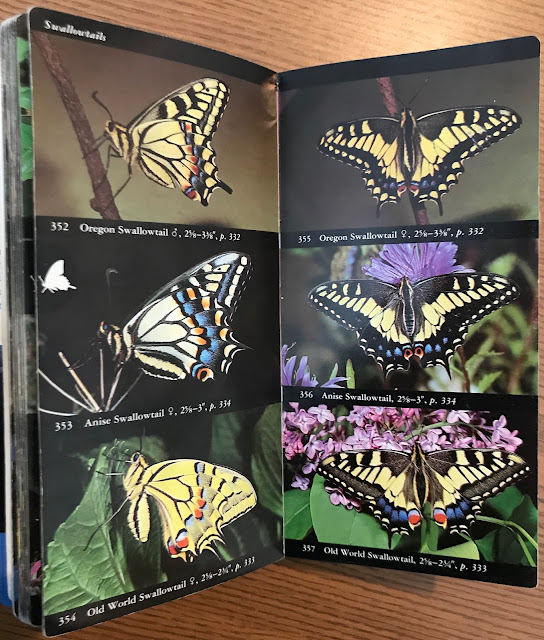 Another family book that wound up in my library :) I loved to just look through all the pictures in this book, so much inspiration! There is a lot of good information too, I used some of the ideas in my early attempts at rearing butterflies and moths. 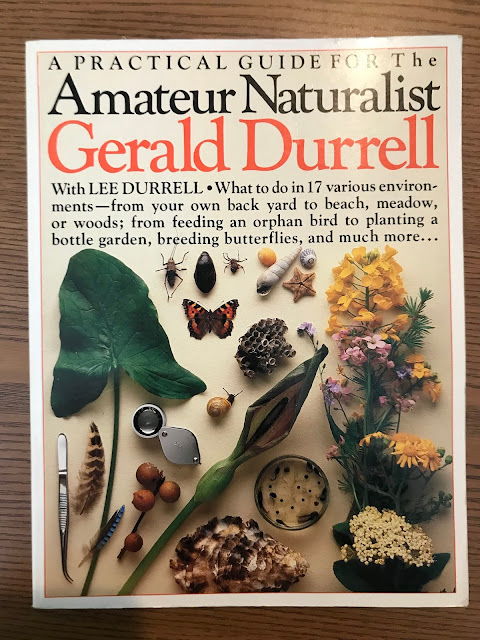 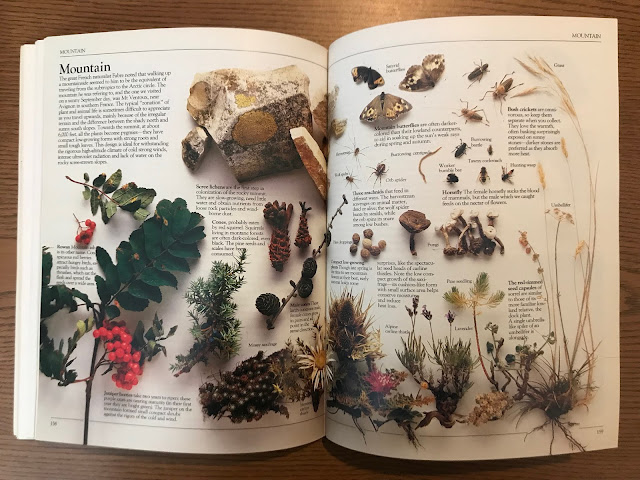 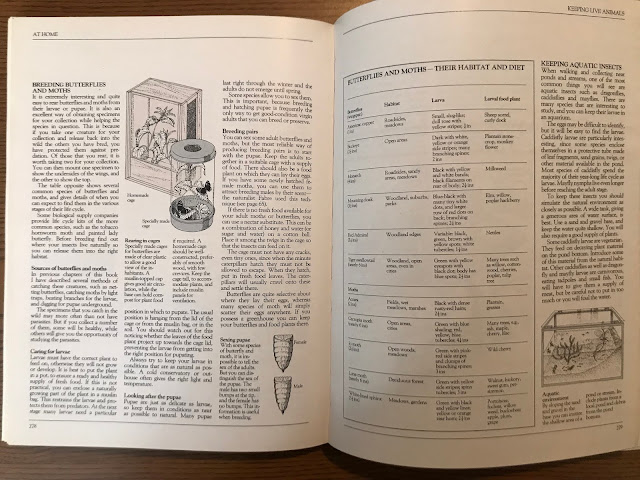 Ahhh...Bug Wise! I loved this book! Much like the Amateur Naturalist but in a simple format that was more easily digestible in my younger years, I used it all the time. 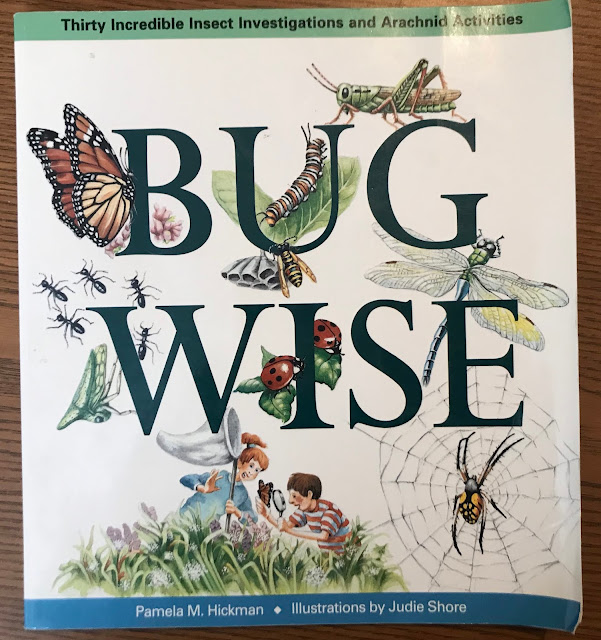 This was similar to Bug Wise but included all wildlife and color illustrations. It was a fun little book but not as well-used as some of the others here. 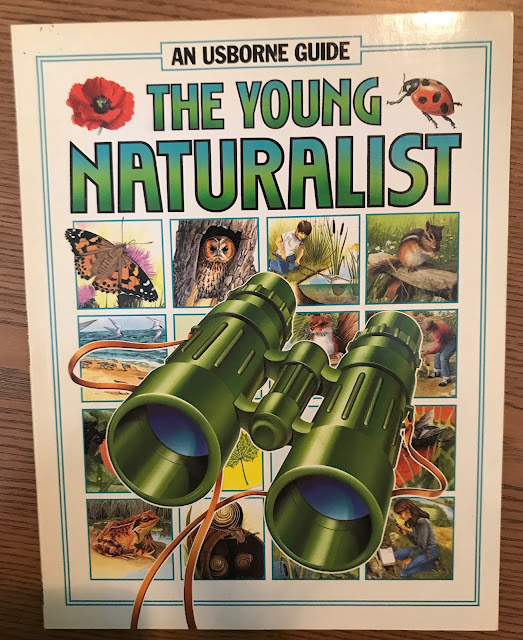 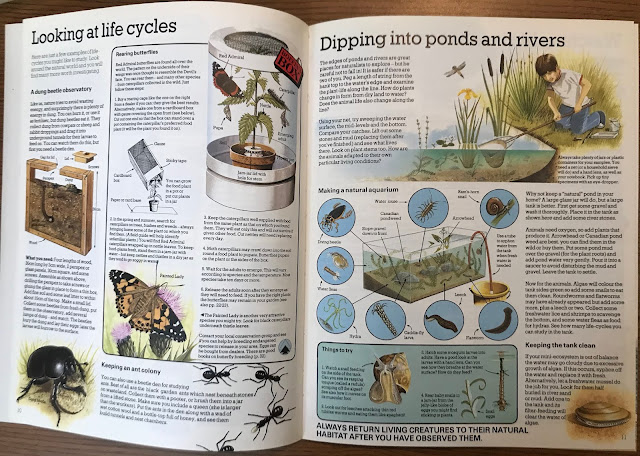 Usborne Guides, like this and The Young Naturalist above, were staples for home schoolers. We loved to look at all the pictures and read the snippets. I would dream about all the habitats and wished I lived by a creek or pond so I could find all the critters these books talked about. My sister and I were thrilled when we discovered a bunch of tadpoles living in our "pond" (seasonal runoff from irrigating our cow pasture), we didn't think the water was nice enough that anything would live in it! We were so excited to get a closer look that we got permission from Dad to use his fish net to catch some...but we didn't pay attention to his directions and grabbed his long-handled smelt-dipping net hanging in the shed instead of the little hand net he had intended, haha...well as soon as he saw us trying to catch the tadpoles with that long net we were quickly corrected and had to thoroughly wash out that fancy net so the cow pond water wouldn't ruin it! Whoops! We eventually did catch some of the tadpoles and had fun studying their little suction mouth and developing legs. Fun times! 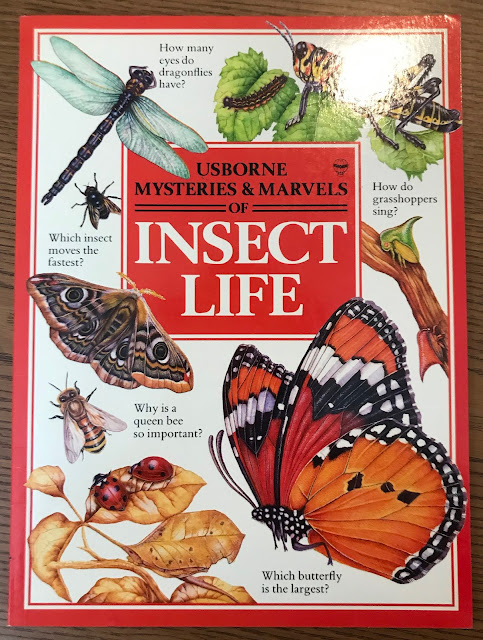 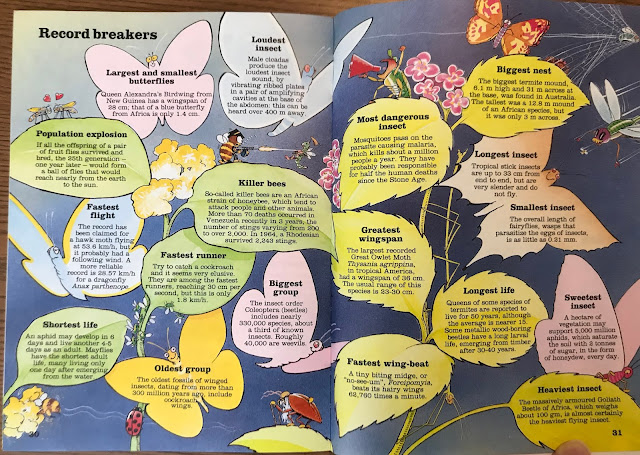 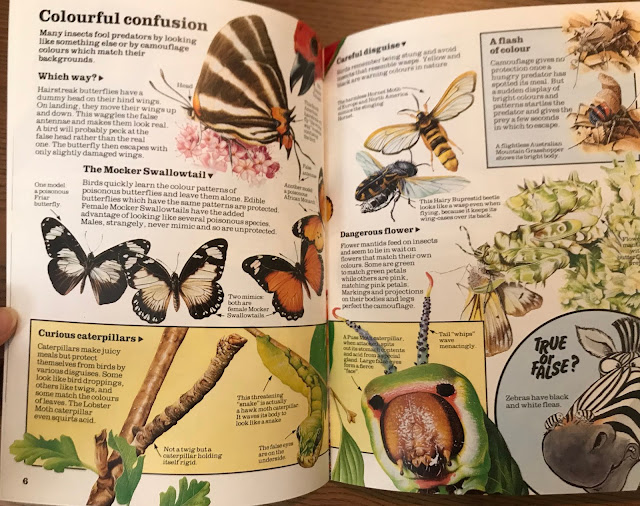 This was my first step into a more advanced level of entomology. I don't remember if I got this book before or after we moved to central Washington, but its instructions on how to collect insects and spread them are how I first learned and started my own collection at age 10 in central Washington. Those first few specimens were kept in plastic clamshell containers (like what donut holes and pastries come in) with some scraps of styrofoam blocks glued to the bottom. Unfortunately, I didn't know about dermestid beetles yet, and after a few years most of the specimens were eventually destroyed. I still have a Woodland Skipper (Ochlodes sylvanoides) pinned with a short sewing pin from that early collection, along with a couple other butterflies collected a year or two later and mounted a little more properly on insect pins (longer and thinner than sewing pins). 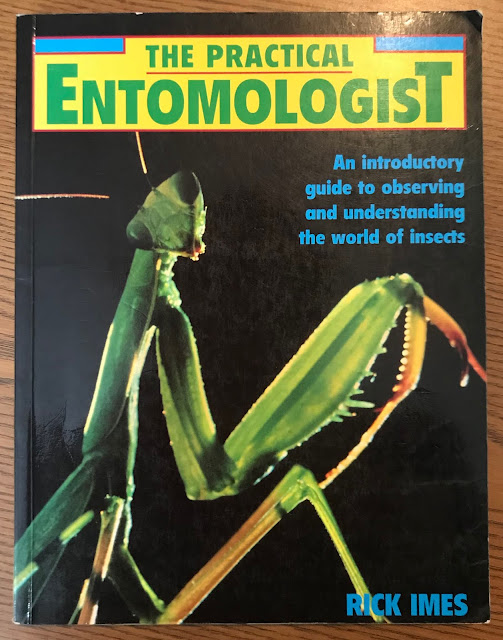 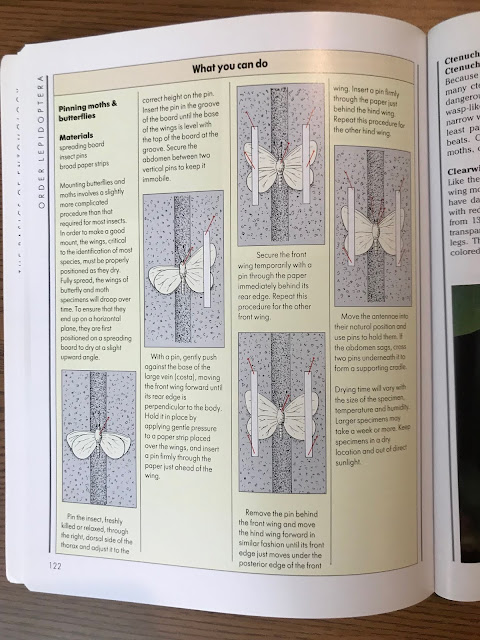 Another one of my favorite books, this one had lots of tips for what to look for during each season. I liked that it gave me ideas of things to do throughout the year, not just in different habitats like the other books. This was great for an active outdoors kid! It has a surprising amount of information packed into each segment. 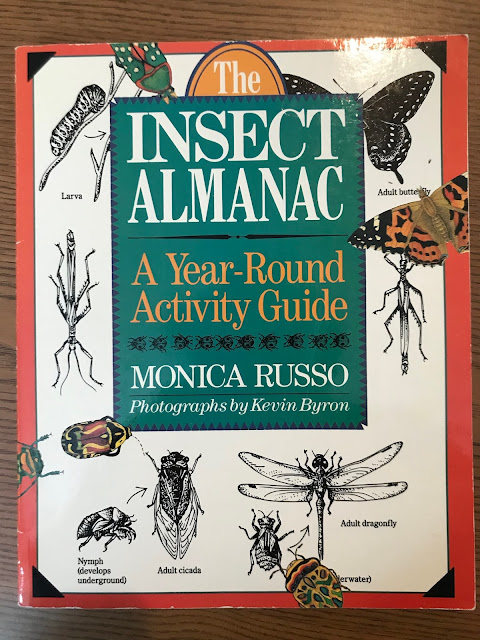 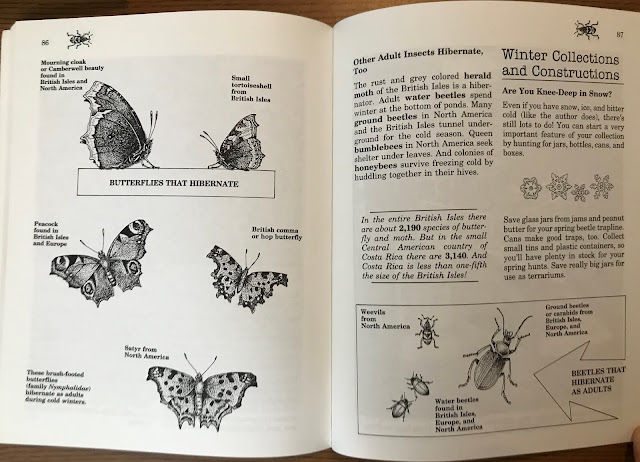 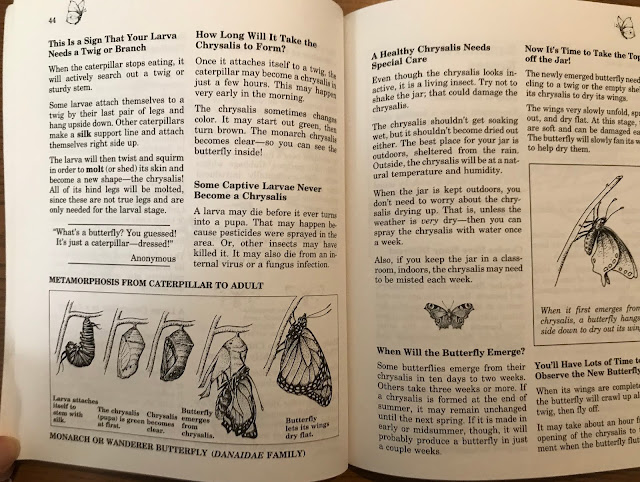 To round off the collection, I didn't use this book as much but enjoyed reading through it occasionally and gleaning whatever tidbits I could. 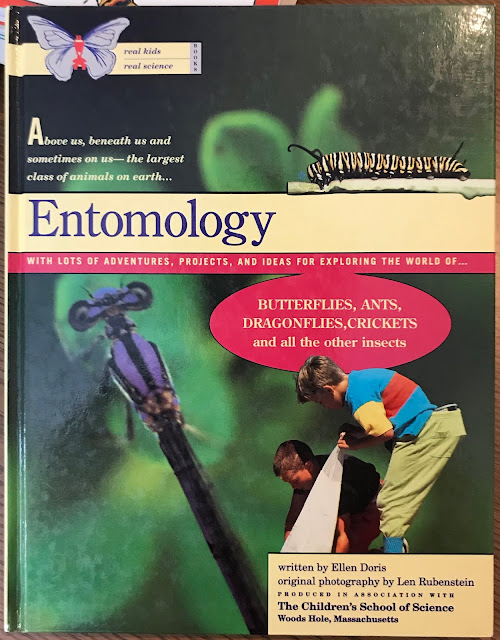 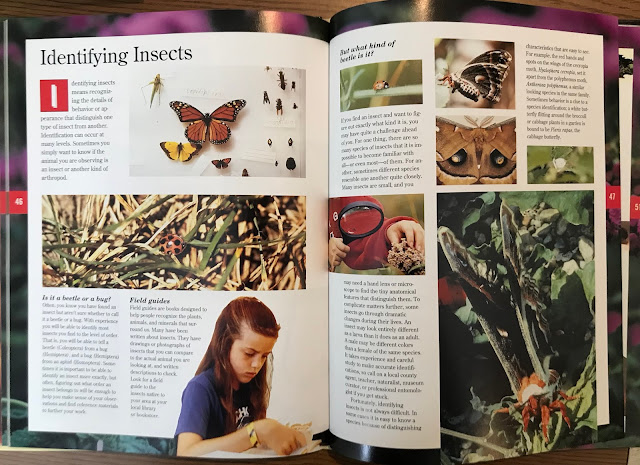 I hope you've enjoyed this little walk through my history, I've enjoyed reminiscing! I hope the books I've authored will impact others in little ways like these and other books through my life have impacted me. I have several more projects in mind for the future, some I may never get around to, but half the fun is in the dreaming!
Happy 2019!
Posted by Caitlin LaBar at 8:57 PM 1 comment: