Here is a little blue glimmer of spring to look forward to. Echo Azures (Celastrina echo) are common and widespread throughout most of western Washington and Oregon and forested areas of the eastern side of the Cascades. Lucy's Azure (Celastrina lucia) is known only from a small area of central Washington (parts of Yakima and Kittitas counties) in the Pacific Northwest, although they occur elsewhere in the central and eastern US. They are very similar and hard to distinguish at first glance. Lucy's Azure generally has a brighter, frostier blue dorsal color on both males and females, compared to the deeper, lavender blue of the Echo Azure. A full profile description of the Echo Azure is found here in a past blog post. Both species use similar habitats and an array of host plants. 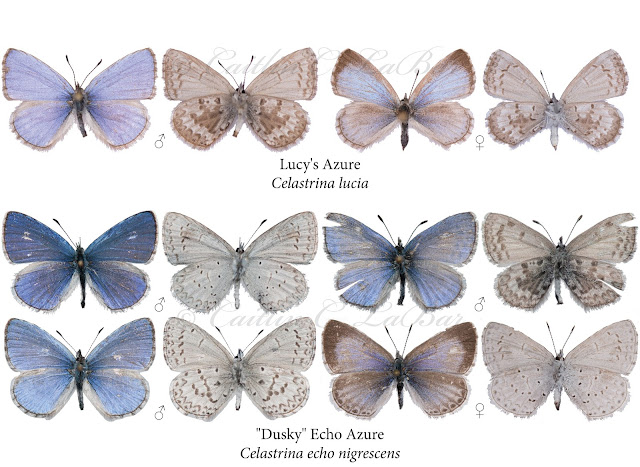 Many of you probably know by now that I've been working with Bob Pyle on a new butterfly field guide. We recently submitted all the materials to the publisher and while it will be another year before it is finally published, I now have more time to catch up on other projects, like this blog and my own Sinlahekin book (trying to finally get it out later this year...we'll see!). My part of the other book involved contacting numerous photographers and trying to source photos for the 202 species that will be covered in the book. It was a monumental task and required pouring over thousands of photos from over 60 photographers.

At the beginning of the project, I knew of several butterfly photographers but not the extent of their photos. By the end of the project I've made new friends and discovered a treasure trove of photos. I'd like to share their public pages here so that others are aware of these resources. While I will still recommend Butterflies of America as the go-to source for identification, these sites may assist with more localized identifications, will provide some ideas of locations to visit for your own photography, and are just plain fun to look at! This is also intended as a partial thank-you to these folks and so many others who helped me out, I hope to return the favor by promoting your websites!

If you have a page of Pacific Northwest butterfly photos I'm not aware of, please contact me and I'll add it to the list. It's too late to get into the book, but I like to have a running list of local photographers.

Bill Bouton - Flickr
Primarily Central/Southern California and Arizona, various other photos from southern and eastern US and some in Mexico.

Bryan Reynolds - Flickr
also The Butterflies of the World Foundation
Professional nature photographer with a tremendous array of butterflies and other insects, plants, and other wildlife, mostly east of the Rockies.

Donald Gudehus - Nature Photography
Primarily Oregon with an assortment of species from other states.

John Christensen - Jasper Sailfin Photography (click here for butterflies and other wildlife)
Professional photographer in Michigan; I actually ran into him by accident in one of my favorite butterfly spots in central WA last year, he went there because of this blog! Bob and I wound up using some of the photos he took on that trip for our book.

John Davis - Flickr
Butterflies and birds, mostly from the Columbia River Gorge and surrounding parts of Washington and Oregon.

Ken Kertell - Flickr
Mostly Arizona and surrounding region, with a gorgeous set of recent photos from the Amazon.

Tom Kogut - Tom Kogut Photography
Washington and Oregon butterflies and wildlife, along with fantastic photos of overseas trips.
Posted by Caitlin LaBar at 12:40 PM No comments: