Ahhh... the delicate art of correctly identifying cloudywing skippers!  I finished mounting the specimens I collected in Oklahoma and now I'm trying to identify the four cloudywings (last four pairs in the photo below, one I accidentally broke trying to open the wings, not realizing it had already dried out).  The first specimen in these photos is an old one from part of a collection that was given to me, and the second specimen I collected in southern Arizona in 2005.  Based on the information I've read, I believe that...
1. was correctly identified as Thorybes bathyllus (southern cloudywing)
2. T. pylades - (northern cloudywing), but that's tentative and it looks like a possible T. bathyllus
3. female T. pylades (originally mistook this for T. bathyllus)
4. female T. bathyllus (southern)
5-6. I think are both T. bathyllus (southern cloudywing)
The best way to accurately determine cloudywing species is to dissect or view the genitalia under a magnifying  glass, which I have no experience in, so for now I'm trying to learn the wing markings.  Apparently, the best way to determine the difference is that T. pylades males have a costal fold, which appears as a slight bulge along the leading edge of the front wing. The four white spots nearest the front wing tip are in a straight line in T. bathyllus, and is slightly skewed in T. confusis. I'm sure there's more, but that is what I've picked up on for now. Next we'll see if I got any of these right, after I talk to someone who knows these critters better than I do!
Posted by Caitlin LaBar at 9:20 PM No comments:

Tired of all this rain? I'm sure it's helping something somewhere, but the butterflies... not so much.  I have never seen the Columbia River so high, it has actually reached the flood stage at Vancouver, WA and Portland, OR, and is flooding some walkways near Vancouver as well as several islands.  The sun has peeked through between showers from ominous storm clouds the last two days, and during one of those sunny breaks today I saw two white butterflies floating about, most likely margined whites (Pieris marginalis), although I suppose they could have been cabbage whites (Pieris rapae).  I've also noticed a lot of lupine blooming along the freeway and in the field next to my office. I haven't spotted any blue butterflies visiting this host plant at the office, and I certainly couldn't see them from the freeway.  If you see any lupine displaying beautiful spikes of purple flowers, take a closer look, you might just find a shimmering blue butterfly awaiting you.

Posted by Caitlin LaBar at 9:27 PM No comments:

Indra swallowtail - Papilio indra
The indra is special to me because it is one of the few local butterflies I always wanted to see, but never have until the last couple years.  It is a relatively small member of the swallowtail family (Papilionidae), and has very short tails.  The anise swallowtail (Papilio zelicaon) is very similar, but is more yellow than black, and has longer tails.  The indra swallowtail shown here is the first individual I had ever seen, which is why I kept it for my collection. 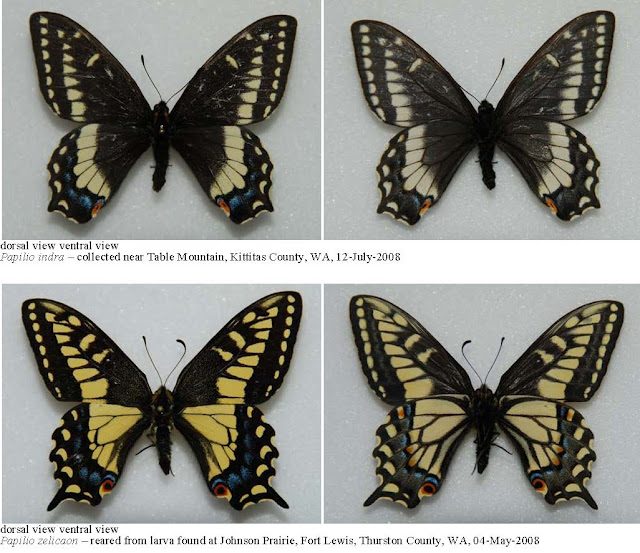 Both indra and anise swallowtails use plants in the parsley family, usually in the genus Lomatium ("desert parsley") such as the one seen below. 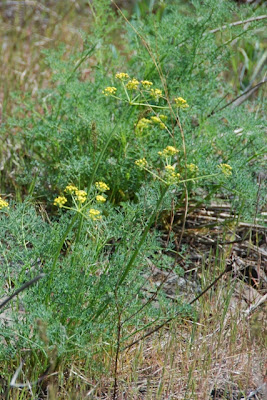 Males are frequently seen "puddling", sipping dissolved minerals and other nutrients from moist sand and other surfaces. (click on photos for larger versions) 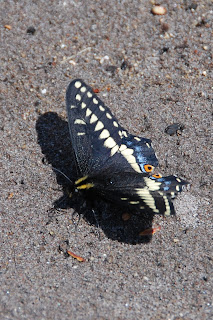 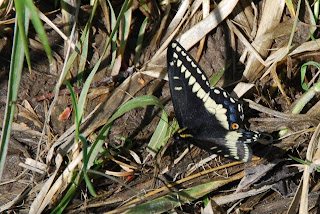 The individuals in the following photos are also puddling, but notice the deformed wing of the indra swallowtail (the other butterflies are anise swallowtails). You can see the complete wing pattern on the right front wing, but the edge is shrunken towards the center.  This kind of deformation may have been caused by a number of factors, including inadequate food supply in the larval stage, damage to the chrysalis, or a genetic deficiency. 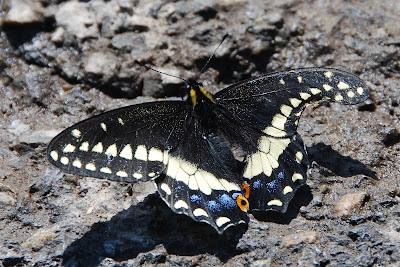 Finally, here are some more photos for your enjoyment... 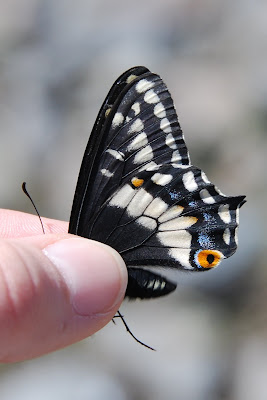 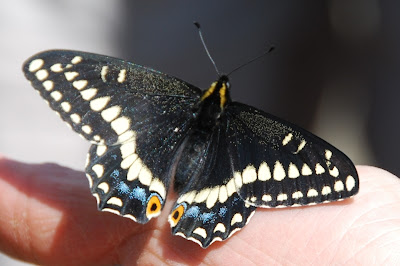 On Monday, the final full day of my visit, my sister and I drove to the Wichita Mountains Wildlife Refuge about 1.5 hours southwest of Norman.  This area boasts free-roaming herds of bison (maintained at ~650 head), Texas longhorn cattle (300), elk (700), and deer, as well as a large prairie dog "town" and other wildlife.  On this particular day, we saw several longhorns scattered throughout the refuge, a few scattered bison and one large herd that included small calves, one deer, lots of prairie dogs and their pups (about 2 months old from what I can tell with internet research), three snakes, two collared lizards, and several butterflies.
Our first stop was a drive to the top of Mt. Scott, where in spite of the haze we had an amazing view of the surrounding landscape. 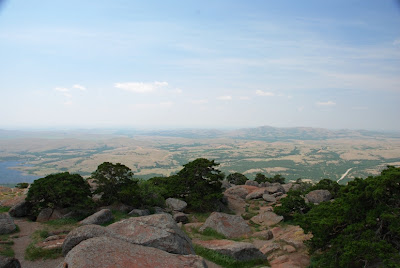 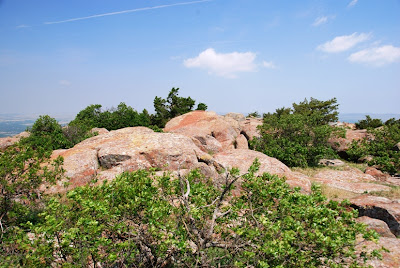 In the parking lot on top of Mt. Scott, I spotted a sachem skipper take a brief rest from the windy conditions...
I also photographed some wildflowers, and set up my camera on a rock and used my remote control to snap a few pics of my sister and me. It was very windy up there! 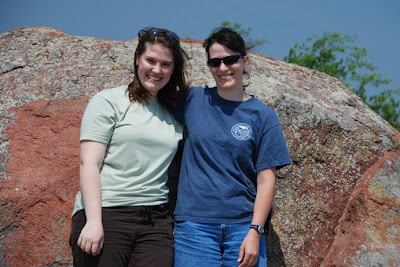 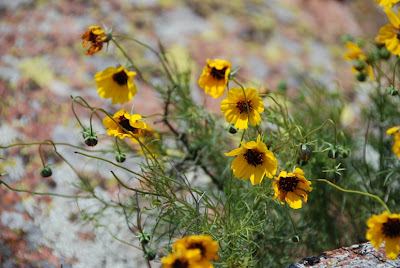 While driving through the first part of the refuge, we saw a longhorn cow grazing near the road, and a herd of bison and their calves up the hill on the opposite side of the road.  Later in the afternoon, we saw three more bison near the interpretive center.
During a quick stop at Quanah Parker Lake, I noticed an odd shape in the water below the dock we were standing on, and then a snake head slowly rose out of the water! It was quite freaky (which became our word of the day after seeing two more snakes and not being sure if they were poisonous or not).  This snake turned out to be another diamondback water snake (Nerodia rhombifer), at least three feet long.  We watched it swim for a while, and would sometimes lose track of it, only to spot it again when it lifted its head out of the water to breath about once every minute or two.
When we left the lake, I saw the first butterfly of the day, a cloudywing (not sure yet if it was northern or southern) on green milkweed.
Our next stop was Lost Lake, were we went for a hike around the lake and lost the trail several times.  The heat and humidity didn't help the situation much, and neither did seeing a large snake on the trail and another snake in the water.  This water snake was much smaller than the two diamondbacks, but I didn't take a picture because it was too close for comfort and we extricated ourselves from that situation in a hurry!  Despite all the unpleasant occurances, we did enjoy the hike and saw a large number of variegated fritillaries (Euptoieta claudia) and dainty sulphurs (Nathalis iole), a possible goatweed leafwing butterfly (Anaea andria), two collared lizards (Crotaphytus collaris, state reptile of Oklahoma!), prickly pear and barrel cacti in flower, and a northern waterthrush (Seiurus noveboracensis).
Finally, at our last stop, we saw lots of black-tailed prairie dogs (Cynomys ludovicianus), including several young pups probably around two months old (they are usually born in early March).
Altogether I had a great time and saw many new animal species to add to my list (including butterflies!).  As my sister is moving soon for a new job, I don't know when the next time will be when I can visit Oklahoma again, but this was a nice send-off for both of us!
Posted by Caitlin LaBar at 5:16 PM No comments:

On Sunday, my sister and I drove a little over two hours northeast of Norman to Tulsa, to visit the zoo and for me to see some new country.  Several zoo exhibits were closed for renovations, but we still saw some neat animals, and several birds I had not seen before in other zoos.  Strangely enough, my favorite animals weren't even part of the exhibits! We saw two cardinals close-up and a pipevine swallowtail (Battus philenor philenor) cruise over the walkway, which added another new butterfly species to my life-list.
Near the edge of the zoo, there was a wetlands area open to wild critters, and while strolling on the small boardwalk over part of the pond, we noticed a large snake hiding in some semi-aquatic plants. Thanks to Richard Butler (www.okherp.com) for help identifying it as the diamondback water snake (Nerodia rhombifer), a non-venomous but aggressive snake that because of its habits is often mistaken for the venomous cottonmouth (aka water moccasin).

Posted by Caitlin LaBar at 4:59 PM No comments:

Posted by Caitlin LaBar at 4:44 PM No comments: