The power has been out at work for two days, so I've started my holiday early and had time to create this buggy Christmas card. The first time I did this was two years ago (see here). This blog had just gained 30,000 page views, with an average of 100 per day. It is now at 84,150 page views, but the average per day has dropped a bit to 60, probably because I haven't been posting as often. Thank you to my loyal readers, and I hope anyone visiting this site for the first time will find it as useful!
Have a safe and happy Christmas and New Year, especially if you are traveling in all the rain, wind and snow storms this week! 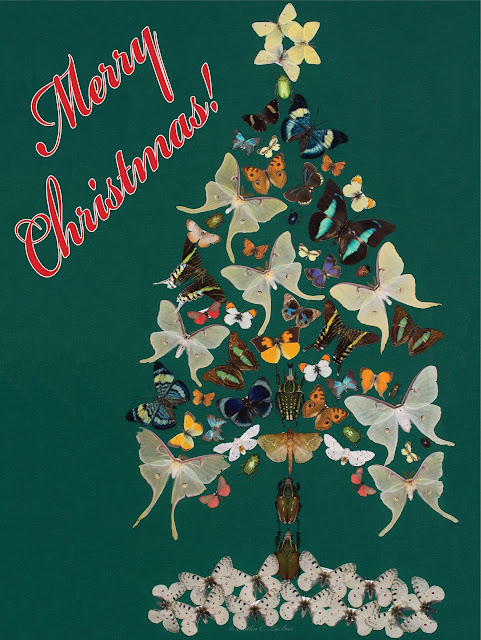 There are three species of Oeneis (eh-NEE-iss) in Washington: Great Arctic (O. nevadensis), Chryxus Arctic (O. chryxus) and Melissa Arctic (O. melissa). The Great Arctic is found throughout the Cascade Mountain Range from Canada into northern California. Chryxus Arctics are found throughout most of Idaho, Wyoming and Utah, parts of western Montana, Colorado, northern New Mexico, eastern Nevada, and the Sierra Nevada mountains of California, as well as the northern counties of Washington up into Canada, with disjunct populations in the Olympics (Clallam County) and central Cascades (along the Yakima/Pierce county line). Melissa Arctics are found throughout Canada and Alaska, but dip into the north Cascades in Washington, parts of the Rockies from Montana to northern New Mexico, and the White Mountains of New Hampshire.
All three of these species have two-year life cycles, and at least in the Northwest, mostly fly in even-numbered years, so keep an eye out for these cryptic brown beauties this coming summer!


Great Arctic (Oeneis nevadensis)
This species almost exclusively flies in even-numbered years, with scattered records in odd-numbered years, and a few local populations that only fly in odd-numbered years.
Description
Wingspan: 50 to 67 mm
Male: dorsal is golden orange with large dark brown discal cell and stigma.  Dark wing margins are flecked with white, creating a scalloped appearance.  One to three eyespots on FW and one on HW, on both dorsal and ventral sides.  VHW heavily mottled dark brown, gray and white.  VFW is similar to but lighter than DFW, with gray and white mottling near the apex.
Female: DFW cell lacks stigma and is not as heavily marked with brown; eyespots are usually larger with distinct white pupils.
Egg: white.

Chryxus Arctic (Oeneis chryxus)
This species primarily flies in even-numbered years, but is found in odd-numbered years more frequently than the Great Arctic.
Description
Wingspan: 44 to 57 mm
Male: dorsal is light gold-brown to deep orange-brown with large dark brown discal cell and stigma.  Dark wing margins are flecked with white, creating a scalloped appearance, but not as striking as the Great Arctic.  One to four eyespots on FW and one on HW, on both dorsal and ventral sides.  VHW heavily mottled dark brown, gray and white.  VFW is similar to but lighter than DFW, with some gray and white mottling.
Female: DFW cell lacks stigma and is not as heavily marked with brown.
Egg: white.

Melissa Arctic (Oeneis melissa)
Like the previous species, Melissa has a two-year life cycle, but unlike the others it regularly flies in both even- and odd-numbered years.
Description
Wingspan: 42 to 51 mm
Male: partially transparent, charcoal to brown-gray above and below, with dark gray and white mottling on VHW and apex of VFW.
Female: wings more rounded, less elongated.
Egg: white.

Larva: mostly buff with horizontal stripes in varying shades of pale green, white, gray and black.
Pupa: brown with yellowish and gray bands.
Similar Species
None. The VHW is a cryptic mottled gray and brown like the other two arctics, but this species lacks all orange coloration and eyespots.
Habitat & Biology
Habitat: alpine meadows, ridges and scree, usually above timberline (7,000+ feet elevation in Washington).
Overwintering stage: first winter as early or mid-instar larva, second winter as late instar larva.
Larval host: no Washington records.  Uses various grasses and sedges in other parts of its range.
Adult food source: alpine flowers.

Posted by Caitlin LaBar at 9:55 PM No comments: