Bob's and my book won the "nature guide" category of the 2018 National Outdoor Book Awards! 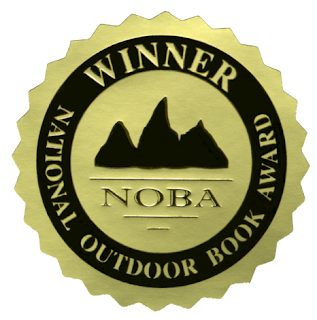 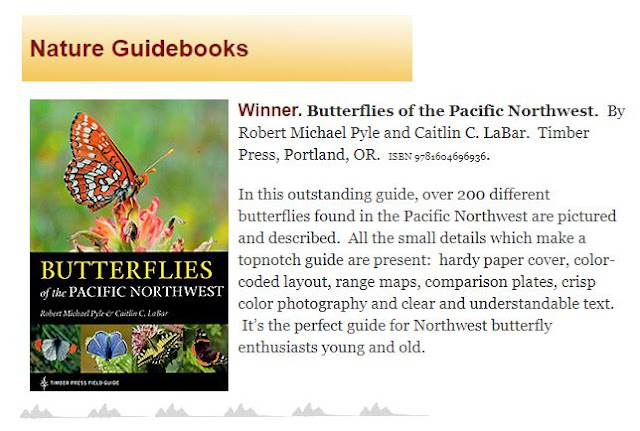 It came as a surprise to me because I didn't even know we were in the running, quite exciting!
To learn more about this award and to see the other winners in all ten categories, visit their website: National Outdoor Book Awards

Also, Bob and I will be at the Wild Arts Festival in Portland this weekend. We'd love to see you there! We'll be signing our book from 12-4pm on Saturday the 17th and 12-1:30pm on Sunday the 18th (Bob will be there until 4 on Sunday). The book will be available for sale during the festival, as will Bob's new novel, Magdalena Mountain.
To see the full schedule and information about parking and other authors and artists, visit the Wild Arts Festival website.
Posted by Caitlin LaBar at 7:40 AM 1 comment:

During a stopover at my parents' place after a trip to Okanogan County, we were sitting in the shade under an old lilac bush when a huge swallowtail floated by and started hovering around in the upper branches directly above us. I noted that in spite of its large size, it was a Western Tiger Swallowtail (Papilio rutulus) and not a Two-tailed Tiger (P. multicaudata) because the width of the black stripes were very wide. My parents frequently see swallowtails, sulphurs and other butterflies nectaring on the lilac when it is blooming, but it had long gone to seed at this point so we weren't quite sure what this swallowtail was doing because it was hovering from place to place like it was looking for nectar. I moved away from the lilac to get a better look at the swallowtail and observed it appearing to curve its abdomen toward a leaf while continuing to flutter its wings...suddenly the thought hit me, it was ovipositing! I was a little surprised to see it doing this on lilac, as they usually are found on cottonwood, aspen, willow or wild cherry, but I was so excited at the prospect of finally rearing a tiger swallowtail that I didn't think about it much and focused on solving the problem of reaching that high branch.

This particular lilac bush is more like a tree with its multiple 6+ inch diameter gnarly trunks and 20+ foot height. We estimate it is over 70 years old based on the age of the homestead and the knowledge that the lilac was already well-established when the old house was torn down to build the current house. The branch in question was about 14 feet high, but a regular ladder was out of the question because there would be nothing safe to lean it against. I couldn't back my pickup close enough without scratching it...what to do? Dad to the rescue! He fired up his dump truck and had it backed into the lilac in no time, let down the metal panels on the back so we could climb up in it, then set up a six foot step ladder in the bed, which was about four feet off the ground. I was then able to climb almost to the top of the ladder and pull the branch towards me. After a couple minutes of searching I located the leaf and found the egg!

With egg in hand, I then started thinking that I didn't recall ever reading anything about Western Tigers using lilac as a larval host. A few book and internet searches later, and the only reference to lilac I could find was Art Shapiro's website citing lilac as a host in California. Willow (Salix), poplar/cottonwood/aspen (Populus), wild cherry (Prunus) and ash (Fraxinus) are listed as the hosts everywhere, with sycamore (Platanus), privet (Ligustrum) and sweet gum (Liquidambar) also listed by Art Shapiro. Interestingly, lilac (Syringa) is in the olive family: Oleaceae, which ash and privet both belong to. After talking to Washington lepidopterists, it seems my find is the first record of Western Tigers using lilac in Washington, possibly even anywhere outside of California (if you have recorded them on lilac anywhere, shoot me an email). It is likely that it has just been overlooked all this time, or perhaps they prefer old (i.e. tall) heirloom varieties over more recent varieties that might be less attractive to the butterfly. In any case, if you have lilac bushes, closely watch your tiger swallowtails to see if you notice any strange behaviors around them instead of simply nectaring on the flowers! Now is the time of year to look for tiger swallowtail larvae on all of the hosts listed above - watch for a caterpillar resting in the center of the top of a leaf. Early instars look like bird poop but become a camouflaged green with two large "snake eyes" as they mature. If you find any let me know!


I am rearing it on lilac; a couple 3ft high suckers that Dad dug up from around the base of the old lilac which I then brought home and potted. So far the larva seems to be doing well and has been feeding for about a week now. I'll continue to post photos of it as it grows.
Posted by Caitlin LaBar at 1:35 PM 3 comments:

In my last post, Ceanothus Silk Moths part 1, I ended with the middle-stage 3rd instar larvae. This post picks up with the 3rd instar molting to 4th and ends with a mess of cocoons!


Note that when the larvae (not just this one but all were like this) molts from 3rd to 4th instar, the six large scoli behind the head are mostly yellow-orange but darken to a varying amount of black around the middle with a coral-colored tip.

The 4th instar larvae in the middle of the above photo is the same larvae on the right in the photo below and is also pictured in the 5th instar later in this post.

In the photo above, the larva on the right had the longest scoli of all the larvae feeding on madrone, you will see this in a later picture also when it is in 5th instar. The larva on the left has very small scoli, which will be reduced to almost smooth/non-existent in the 5th instar, compared to these scoli being almost the same length as the six in front on the Douglas-fir-feeding group.


Note that the dorsal and lateral scoli are nearly the same length as the front six compared to the madrone-feeding group.


Most 5th instar larvae in the Douglas-fir group had obvious black bands and medium coral tips on the front four large scoli (photo above) while some had almost no black and pale coral tips (photo below). The latter was more common in the madrone group.


A couple of the Douglas-fir larvae had tiny black tips on a few of the dorsal scoli, seen in the photo above (towards the rear).

The late 5th instar larvae on madrone were so voracious they not only ate the leaves but also chewed the petioles all the way down to within an inch of the stem!

Douglas-fir-feeding larvae grasp each needle with their true legs and munch about halfway through one side of the needle for up to a centimeter, then reach back up to eat the other half, then repeat down the needle until the whole needle is gone.

Some people think that prolegs (the false legs on larvae, compared to their six true legs that become the legs of the adult) are like suction cups. In fact, they are covered in tiny hooks like the surface of velcro and allow them to grasp just about anything very tightly.


Now they sleep until next spring!
Posted by Caitlin LaBar at 11:40 AM 3 comments:

Hyalophora euryalus - hi-all-oh-for-ah yur-ee-ah-lus - the name rolls off my tongue like a little jingle and makes me happy at the thought of this burgundy and gray moth with long white fang-like crescents. My first introduction to this beauty was as a teenager at a summer camp when I found a freshly-emerged male on the screen door of the girls cabin one morning in the Methow Valley of Okanogan County. I was instantly smitten and have long wished to rear this species from egg to adult. I might have done it sooner if I was inclined to stay out at night at the right time of year and set out some black lights, but sleep and daytime butterflies were a stronger pull!

On May 7, a friend in Vancouver, WA posted a picture of a giant moth outside her garage...not only was I excited to see that it was female, but I noticed what appeared to be two eggs stuck to the siding! A few messages back-and-forth later, my friend had the moth captured in a large container and I could barely concentrate on work the rest of the day before I drove the 45 minutes to her house. Sure enough, there were two eggs still stuck to the siding, so I gathered those too and returned home with my prize. Over the next few nights I gathered a total of 81 eggs before the moth expired.

Ceanothus silk moth adults, like other giant silk moths (Saturniidae), do not eat and only live about a week. You might think of the adults as the equivalent of flowers: visible and pretty and allow plants to reproduce, but don't last very long.

I gave half of the eggs to a colleague who studies Saturniids. He advised me to split the brood between Douglas Fir and Pacific Madrone because the larvae will look quite different in the final instar (a hostplant-induced morph). 39 of my 40 eggs hatched a week and a half later. Because the eggs were laid over several nights, the larvae hatched over three or four days; the first ones doubling in size by the time the last ones had finished hatching. This variation in hatch date and growth rates has resulted in larvae of many different sizes even though they are all from the same parent.

Butterfly and moth caterpillars hatch relatively quickly and with little warning (some eggs turn clear but these don't) so I've never had the opportunity to capture the moment when the caterpillar crawls out of the egg...until now! While watching the caterpillars that had already hatched, I noticed an egg moving and a caterpillar head breaking out of the end, so I grabbed my camera and quickly took several photos.

That's all for now!
For more information about these moths and their range, see the PNW Moths page and the BAMONA page.
Posted by Caitlin LaBar at 4:59 PM 1 comment: