I updated the "Naming Lepidoptera" page (click here or on the link in the left-side column) with two new photo-spreads.  One of these days I'll get around to adding a short description of each family and subfamily, but for now I thought my readers might like to see some pretty pictures!  The colors are slightly skewed because of the PDF/JPEG conversion, but you get the idea. 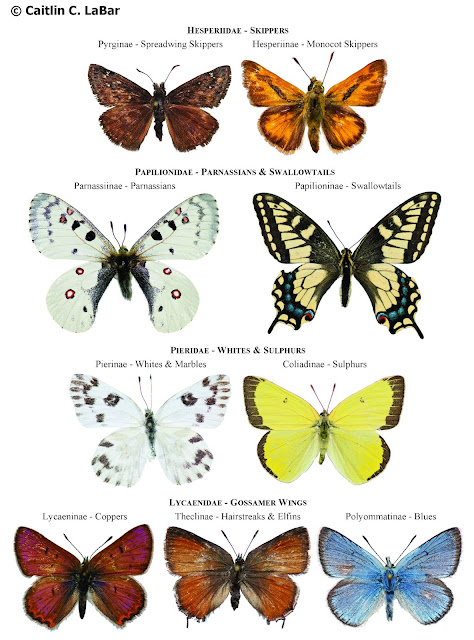 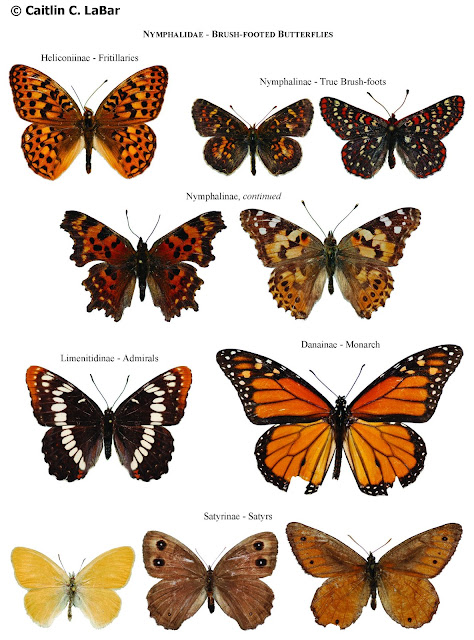 Posted by Caitlin LaBar at 11:03 PM No comments:

After the last post about fritillary identification, I thought it might be useful to follow up on the photos I used for the "test" section, explaining how I have determined their identification.  If you haven't taken the test yet, please read the Fritillary Frenzy post first, before reviewing the explanations listed here.

A - Hydaspe Fritillary Argynnis hydaspe
If you said this was a Northwestern Fritillary because of the lighter submarginal/postmedian band, note that it still has a red tint to it, more pink than the yellow-beige of the Northwestern Fritillary photos I've shown. Also, the upper three cream spots in the center band are oval-shaped, not pointed (compare with #D below).  All other species in the test have silvered spots, except the Mormon Fritillary which can also be both silvered or unsilvered, but the brick-red color identifies this as Hydaspe.

B - Zerene Fritillary Argynnis zerene
This is an average-looking Zerene: rounded silver spots, beige VHW ground color with reddish-chocolate overtones.  It is a little more reddish than some specimens, but not red enough to be Hydaspe, plus it has silvered spots.  It is too dark and the silver spots are too rounded to be Callippe.  It may be confused with Coronis because the silver spots have a little more black around them than some of the other Zerene photos I showed, but the complete lack of olive/green scaling on the VHW identifies it as Zerene, not Coronis. 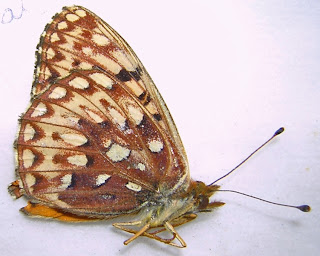 D - Northwestern Fritillary Argynnis hesperis
Unsilvered spots, so it has to be either Northwestern, Hydaspe, or Mormon.  The discal area is too dark to be a Mormon Fritillary, and not red enough to be Hydaspe.  In addition to that, the submarginal/postmedian band is yellow-beige, not pinkish like Hydaspe, and the center band of cream spots are much more pointed than Hydaspe's spots.

E - Zerene Fritillary Argynnis zerene
This is one of the tricky specimens I talked about, the silver spots appear to be ringed with more black, so don't feel bad if you thought this was a Coronis Fritillary!  The first clue is the ground color of the VHW; it is a light orange-brown with hints of rust, not yellow-brown and olive like the Coronis.  The second clue is the black band across the middle of the dorsal hindwing (DHW); it is much wider than in male Coronis (see #L below).  The black would not be a reliable indicator if it were a female, but male Coronis are almost always more finely marked on the dorsal surface than Zerene.

F - Hydaspe Fritillary Argynnis hydaspe
I picked this specimen because some of the cream spots are a little more elongated than average Hydaspe, and the submarginal band is a little lighter because this is a slightly faded/older individual.  As I explained for specimen #A above, the VHW ground color is brick-red, not chocolate-brown as in the Northwestern Fritillary, and the submarginal band still has a pinkish-tint to it, not the yellow-beige seen in the Northwestern.

G - Coronis Fritillary Argynnis coronis
This is the other tricky specimen I was referring to, and the only one here that I am not entirely confident about, so if you thought it was a Callippe or Zerene, you might actually be correct, but I will explain why I believe it is Coronis.  It is a female, which makes it even more difficult to determine, because the standard markings that make the males easier to identify are a little different.  This is one of those cases where you can't really make the determination based on a single aspect, such as color or spot shape, but taken together they point towards one species.  Please feel free to argue with me on my following explanation, it might help one of us come to a stronger conclusion!
1. Overall size.  You can't tell from the photo, but this is a larger butterfly (2.25 inches).  Female fritillaries tend to be larger than males anyway, and 2.25 inches is not uncommon for Zerene and Callippe, but a larger size often points towards Coronis.
2. Separating it from Callippe.  The silver spots are a little more elongated and slightly pointed than the average Coronis, which would seem to point more towards Callippe (also read my explanation for #L).  However, the spots do not fill the VHW quite as much as Callippe usually do, and there is no greenish dusting of scales over the whole surface.  The base color has a little bit of a greenish tint common to Coronis and similar to Callippe, but the markings are still sharp, not entirely clouded over like Callippe often are (see #H, male Callippe in the photo below).  If you are saying "now wait a minute, what about that first female Callippe in the last post?" (see here), yes I know it looks an awful lot like this one, and I'm not 100% sure on that identification either.  However, notice that the ground color in that specimen is much more even-toned, not darker in the discal area like in this specimen above, and the silver spots (of the "Callippe") aren't quite as sharply framed as in this one (#G, "Coronis").
3. Separating it from Zerene.  The VHW ground color is more yellowish/greenish-brown and chocolate, with almost no hint of the rust-coloring you see in Zerene.

H - Callippe Fritillary Argynnis callippe
I included this Callippe male because the VHW appears to have slightly better-framed silver spots, possibly leading you to confuse it with Coronis.  It is a little more difficult to identify butterflies from photos, because you can't see the actual size and are not able to tilt it in different directions to see subtle coloring that is washed-out or incorrectly reflected in the photo.  In this case, it is a little harder to see in the photo, but this butterfly has a greenish cast over the entire VHW, slightly clouding the silver spots and giving it a dirty appearance, leading to the identification as a Callippe and not Coronis.  Also, the silver spots cover the wing a little more completely than Coronis; it is a subtle difference, but flip back and forth between this (#H) and the image above (#G) and you will begin to see what I mean.  Pay particular attention to the silver blotches in between the major spots.
On a side-note, this is actually a slightly-aberrant specimen; the tips of the forewings are not missing scales as it appears, the scales are there but lack normal coloring, while the rest of the butterfly is normally-marked.

I - Mormon Fritillary Argynnis mormonia
This is a case where it would be a dead give-away if you saw this specimen in person, because it is smaller than all the others shown here, with a wingspan just over 1.5 inches.  I knew that without a size reference you would have to depend on other points of identification, so I chose a specimen that had a lighter VHW ground color and silvered spots, similar to Zerene.  The difference is that this does not have the reddish-tint in the VHW color you see in Zerene (#J, below), and the black markings on the dorsal surface are much smaller than Zerene.  Although the spots are silvered, there is still a cloudy appearance that you will not see in Zerene, and this cloudiness also eliminates any defined framing of the silver spots that you would see in Coronis.

J - Zerene Fritillary Argynnis zerene
This is another standard-looking Zerene, similar to #B.  The silver spots are not large or elongated enough to be easily confused with Callippe, and the VHW color has no trace of green that would be seen in Callippe and Coronis.

K - Coronis Fritillary Argynnis coronis
This is another female Coronis, similar to #G but a little more typical.  The marginal (outer) row of silver spots on the VHW is strongly rounded, and the silver spots do not cover the discal area as widely as Callippe.  The VHW ground color is a little too greenish to be Zerene in my opinion.  Flip quickly back and forth between the Coronis, Zerene, and Callippe photos in the Fritillary Frenzy post, and hopefully you'll start to see the subtle differences in color (Coronis v. Zerene) and spot shape/size (Callippe v. Zerene and Coronis).

L - Coronis Fritillary Argynnis coronis
This is an average-looking Coronis male.  I included it so it would be sort of a give-away and comparison for some of the other specimens shown.  In the Fritillary Frenzy post, I mentioned that the rounded or pointed/triangular shape of the outer row of silver spots is not a reliable marker for determining Coronis vs. Callippe, but this is one case where it is.  Callippe will always have triangular marginal spots, although they are sometimes blunted.  Zerene varies widely between flat, rounded, blunted triangle or sharp triangle spots.  Coronis tend to be flat or rounded but occasionally approach a triangular shape, such as #G above.  The male shown here has the distinctly-framed silver spots typical of Coronis, and the VHW base color is much more yellow-beige with greenish overtones compared to Zerene.
Posted by Caitlin LaBar at 8:59 PM 1 comment:

Update 1/6/2013: I corrected a few places in this article referring to basal, discal, submarginal, and postmedian, and I have added a new page to my blog that builds on a post from last June, click on "Wing Terminology" in the contents bar on the left, or go here. 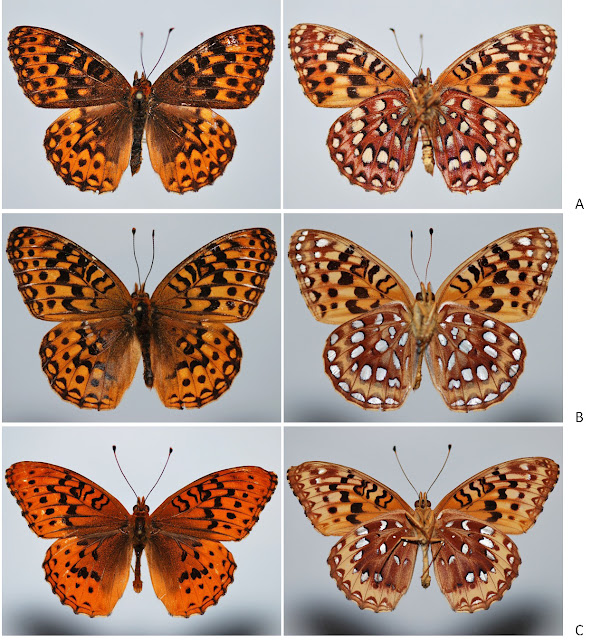 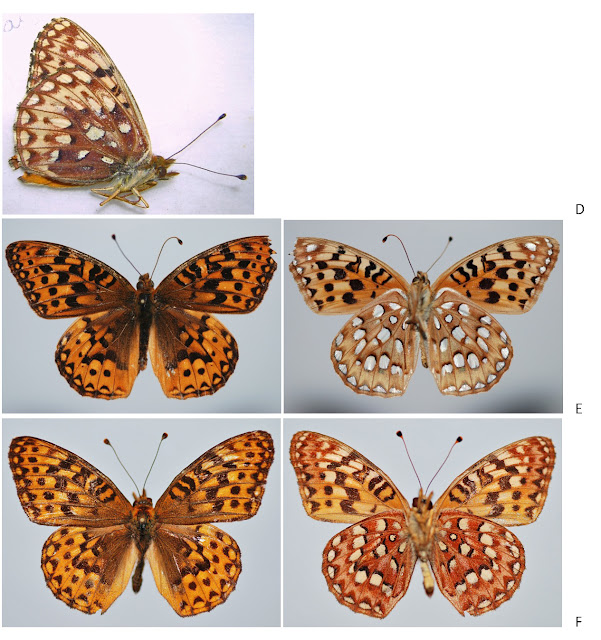 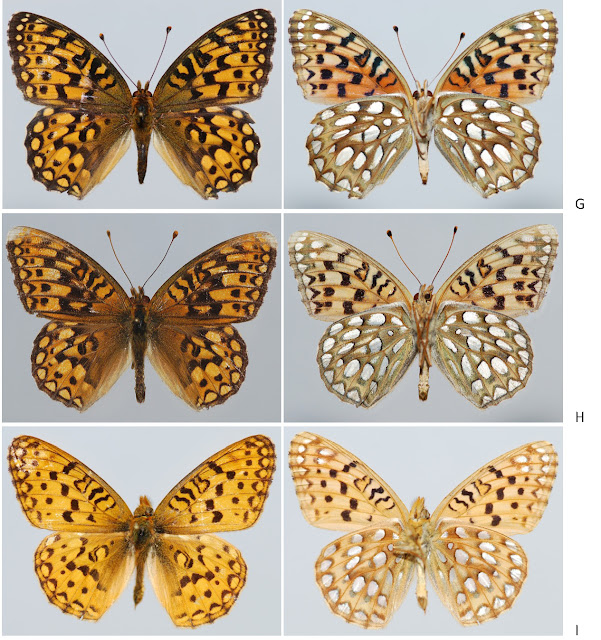 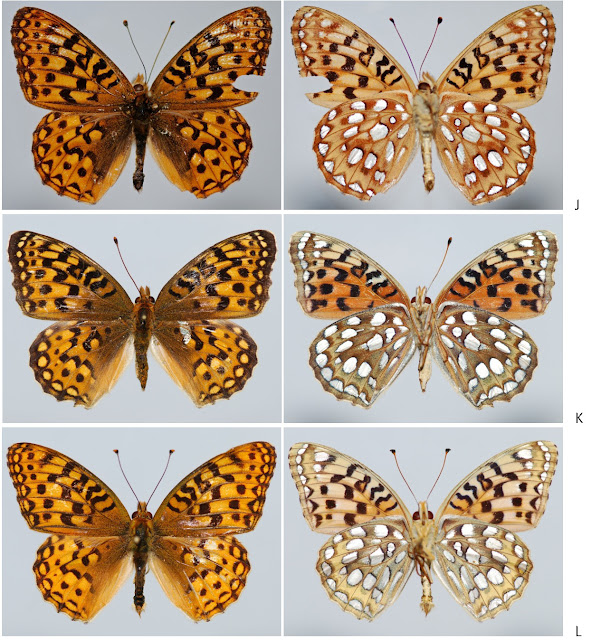 Conclusion
I hope that this guide has helped you to understand the differences between these species, and given you the confidence to try your hand at identifying the next frit you see.  Keep in mind that while you may be able to see the differences between these specimens, when you are holding a fritillary in your hand and trying to identify it, you may find yourself confused all over again.  I have to refresh my memory every Spring in order to maintain any semblance of proficiency at correctly identifying these critters!  After some practice, it will become second-nature for you to take a quick glance and simply "know" that an individual is a particular species, without having to carefully examine the markings and define how you came to that conclusion.  Also keep in mind that these butterflies are variable, some species more so than others, therefore it is helpful to study series of photos such as what I have provided, and what the Butterflies of America website makes available. That way, you can compare the variations and decide which best matches the one you have.
Happy chasing!