In my last post I included photos of a Northern Cloudywing (Thorybes pylades) that I am rearing from an egg found in the Klickitat River Canyon.  It is now in the 5th instar and is 24mm long.  I am re-posting the original photo set so you can compare them with the new set. 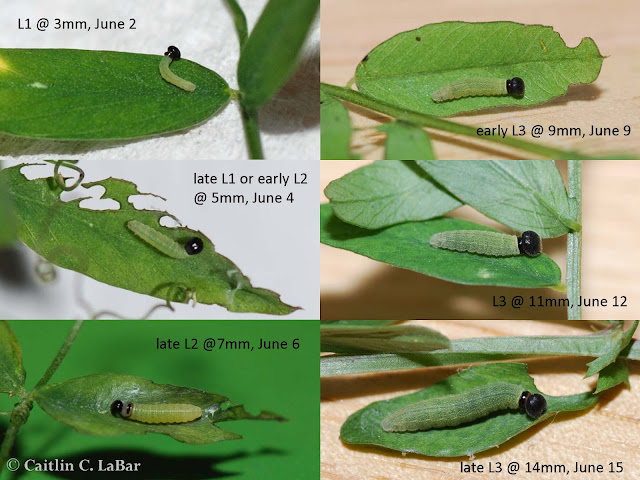 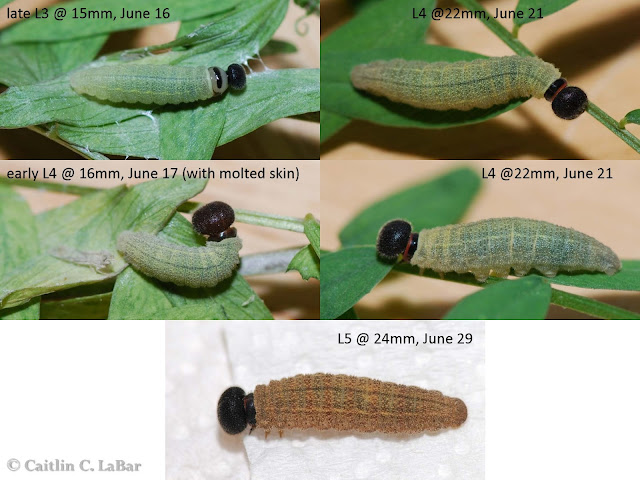 That's how I described my day in the Klickitat River Canyon on June 1 when telling my parents about it.  Seemed like every time I turned around I found another caterpillar!  Mourning Cloak (Nymphalis antiopa) larvae covered many of the willows along the river, most were over 2 inches long (5th/final instar), but there were a few clusters of mid-instar larvae around an inch long.  Bushes of Gray's desert parsley (Lomatium grayi) held several late-instar Anise Swallowtail (Papilio zelicaon) larvae and two Indra Swallowtail (P. indra) larvae.  Several California Tortoiseshell (Nymphalis californica) larvae were found on deerbrush ceanothus (Ceanothus integerrimus), and Elegant Sheepmoth (Hemileuca eglanterina) larvae were found on snowberry (Symphoricarpos albus).  I found several eggs on lupine flower spikes that were either Arrowhead (Glaucopsyche piasus) or Silvery (G. lygdamus) blues, two Silvery Blue larvae on lupine seed pods, and an egg on Lathyrus (pea, not sure of species) that I believe is a Northern Cloudywing (Thorybes pylades) that I am now rearing on American vetch (Vicia americana).
During the following week when I was at the Sinlahekin Wildlife Area, I found several masses of early/mid-instar Milbert's Tortoiseshell (Aglais milberti) larvae and one 5th instar Satyr Anglewing (Polygonia satyrus) larvae, all on stinging nettle, along with another Northern Cloudywing egg on American vetch and several 1st instar Anicia Checkerspot (Euphydryas anicia) larvae on Chelan penstemon (Penstemon pruinosus).
A friend of mine asked how in the world I find all this stuff, particularly the eggs. It's sort of a mix of probability, intuition, and knowing the host plants and life stage of different species at different times of year.  For example, I knew that Anise Swallowtails use many species of Lomatium along with other species in the carrot/parsley family, and that Indra Swallowtails specifically prefer Gray's desert parsley.  Both swallowtail species fly fairly early in the spring, so their larvae should have been on those plants this time of year.  Anise Swallowtail caterpillars are bright green with black bands and yellow or orange spots, and are pretty easy to pick out against the feathery green leaves of Gray's desert parsley.  However, my mind was focused on that image so I completely missed the two tiny black Indra larvae that Ben found!
The smaller Indra larva died a couple days later from refusing to feed on dill or fennel (a risk I took as Indra are picky eaters compared to Anise Swallowtails which eat nearly anything in the parsley family).  The larger larva seemed to be doing alright on dill, but died a week later possibly from a bacteria or virus that also attacked one of the four Anise Swallowtail larvae I brought home.
Most species of blues have been flying for a few weeks now, or are beginning their flights, so eggs and larvae can be found now, usually on legumes.  Silvery and Arrowhead blues tuck their eggs in between the unopened buds of lupine and occasionally on the flowers or seed pods.  Boisduval's Blue (Plebejus icarioides) primarily lay their eggs on the underside of lupine leaves.  Larvae of these species can be found in the same locations.
Purplish Coppers (Lycaena helloides) feed on dock (Rumex sp.), smartweed (Polygonum sp.) and other related species, and their eggs and larvae are often easily found on these plants.  In some cases the plants are literally sprinkled with eggs!
A couple years ago I discovered a colony of Northern Cloudywings at the Sinlahekin, and observed the females laying eggs on American vetch (Vicia americana) and cream pea (Lathyrus ochroleucus).  The eggs are relatively large (~1mm) and white, making them rather conspicuous on the underside of leaves.  When I saw a pea/vetch-type plant in the Klickitat River Canyon I flipped over a few leaves and found the egg shown here.
As mentioned before, I located the hostplant of Anicia Checkerspots at the Sinlahekin this year: Chelan penstemon. Checkerspot larva usually build web nests similar to tent caterpillars.
I always check any nettle I find for larvae of Milbert's Tortoiseshell (Aglais milberti), Satyr Anglewing (Polygonia satyrus) and Red Admiral (Vanessa atalanta).  Milbert's lay their eggs in masses, and the caterpillars feed together until later instars when they build individual nests, compared to the other two species which lay 1-3 eggs at a time and the larva feed singly.  There will always be some exceptions, but it has been my experience that Milbert's tend to make leaf nests with the leaf folded upward, while Satyr Anglewing and Red Admiral larvae fold the leaves downward.
Finally, here are some photos of the Mourning Cloak larvae we were finding all over the willows along the Klickitat River.  I brought four of the larvae home and all pupated within three days.  One was parasitized; the chrysalis appeared dead yesterday and today there is a hole in it and some kind of fly pupa in the cage.  Oh! and how appropriate, I just glanced over at my bug cage and noticed the first butterfly has emerged! So lets end this post with my favorite butterfly...

I'm working on a post about all the caterpillars and eggs I saw last week, should be up later this afternoon, but in the meantime I wanted to let everyone know about a new type of spreading board offered by BioQuip that I tried out for the first time (I have no affiliation with BioQuip and wasn't asked to do this review, it's entirely my own opinion).
Economy Pinning Boards (Blue Boards)
I highly recommend these new boards!  They are a high-density polystyrene foam, which allows easy pinning, compared to the traditional wooden pinning boards that I've always had trouble with.  They are also very smooth, which greatly reduces problems with rubbing scales off butterfly wings that I had with the styrofoam boards I've been using (BioQuip's Versaboard, a good product but one I'll be replacing with the new boards).  The only problem I have with these new boards is that they are not deep enough to fully hold the insect pins.  True, the pins do not have to be pushed so far through the board, but then the butterflies would sit only half-way up the pin, and I prefer to have them closer to the top of the pin to allow room for labels on the pin under the butterfly.  So, the way I pin butterflies means that the pins stick out of the bottom of these boards about 1/8-1/4 inch.  I found a way around this problem by using some of the glass-headed pins to tack the blue boards onto the back of my old versaboards as you see in the photos below (the pins are at an angle through the sides of the blue boards).
Update 5/12/2014: at the suggestion of someone at BioQuip, I attached the blue boards to 1/4" foam sheets (plastazoate or polyethylene), which works great.  It provides that little extra depth I needed for the pins without being too clunky. The foam sheets can be cut to the size of the boards, or you can attach 3-4 boards to each 16x18" sheet, either with glass-headed pins or by lightly gluing them around the edges.
I also found that the new boards seem to slightly grip the wings on smaller butterflies, which greatly helped in the spreading process.  For the first time I didn't have any problems spreading the wings of skippers and tiny blues!  Out of all the specimens I collected on my recent trips, I didn't tear any of the wings; usually I always tear parts of at least one or two specimens using the old types of boards.
Finally, the groove sizes are so much better than the sizes on the versaboard.  They have smaller groove sizes available, and these boards can fit many more butterflies than the versaboards.  Here are the sizes they have available and what butterflies each size are used for.
1/16" groove (two grooves per board) - small Hesperiidae and Lycaenidae
Common Sootywing (Pholisora cattallus), skipperlings, Western Tailed Blue (Cupido comyntas), spotted blues (Euphilotes sp.), azures (Celastrina sp.), smaller specimens of Plebejus sp. and some smaller coppers and hairstreaks.
1/8" groove (two grooves per board) - most other Hesperiidae, Lycaenidae, some Pieridae/Nymphalidae
medium/large blues, coppers and hairstreaks, most skippers, small/medium pierids (Anthocaris, Euchloe, Pontia, Colias, etc), most satyrids (Coenonympha, Erebia, Cercyonis), crescents (Chlosyne, Phyciodes), small/medium checkerspots (Euphydryas).
1/4" groove (one groove per board) - fits nearly every large butterfly species we have in the northwest
All other Nymphalidae, all swallowtails should fit in this size except maybe the largest Two-tailed Swallowtails (Papilio multicaudata) or large southern/tropical species.
3/8" groove (one groove per board) - large swallowtails and medium-bodied moths
I haven't tried this size yet and don't see a need for it except for when I collect some sphinx moths or other larger species.
13/16" groove (one groove per board) - largest butterflies and moths
I also haven't tried this one, but it is intended for the largest Lepidoptera species such as the large tropical butterflies and most large moths.
Some notes about my spreading methods...

After positioning the butterfly on an insect pin (long, thin black pins) and placing in a groove on the board, I position the wings using spade-tip forceps (aka stamp tongs) and pin them down with glassine paper strips and glass-headed pins.  Once the wings are in place, I prop up the abdomen as necessary and carefully position the antennae close to the wings.  I've found that the antennae are less likely to be knocked off later if they are close to the wings and not sticking out straight ahead.
For more information about supplies and collecting methods, refer to my "Collecting Lepidoptera" page.
Posted by Caitlin LaBar at 10:32 AM 2 comments:

The first two species shown here are the new records.

I was impressed by the number of large "puddle parties" I saw last week, where butterflies congregate to feed on the minerals in wet soil and sand. This is not uncommon, but these photos show some of the largest groups I've ever seen, so that was fun!
The ruffed grouse scared the wits out of me! She was a little ball of fury and came streaking out of the bushes next to the trail hissing and chasing me, I screamed and took off down the trail for a second before I realized it wasn't a snake and she was only as big as our little banty hens I grew up with! I tried shooing her off with the end of my butterfly net, which made her quit trying to attack me and stand still long enough to let me take a few pictures, while still looking very indignant! The black feathers on her neck are also on the males, and is how they got the name "ruffed".
Posted by Caitlin LaBar at 7:59 PM No comments: