I'm busy preparing for another trip to the Sinlahekin Wildlife Area (almost 4 whole days!), but I wanted to put up a quick post before I leave in a couple days.  Do you remember all my talk about cloudywings last year, after my trip to Oklahoma, and then confirming Thorybes pylades at the Sinlahekin?  I won't bore you with more excited chatter about this little gem (although you may hear more if I can find any larvae on this trip!), but here are photos of the three specimens I collected at the Sinlahekin last year.  I'm sure two are females, and almost positive that the other one is a male.  Male Northern Cloudywings (Thorybes pylades) have an obvious stigma (see my butterfly terminology post) on the leading edge of their FW, which makes the wing look slightly angular.  Normally the stigma is much lighter than the rest of their dark wings, but it is less obvious in faded individuals, such as these.  I'm open to corrections if anyone reading this is more familiar with cloudywings.

Posted by Caitlin LaBar at 9:28 PM No comments:

Whenever you come across a patch of nettle, if you dare to brave the stinging plants, look for leaves that have been folded up or down, and you'll likely find a butterfly larva hiding inside.  Milbert's Tortoiseshells (Aglais milberti) lay their eggs in masses under nettle leaves, and when the larvae hatch, they tend to feed in large groups, becoming more solitary as they mature.  While these larvae tend to be more visible on nettle, they frequently use silk to fold the edges of a leaf together, with the edges facing up (top side of the leaf inside the "tent").  Red Admiral (Vanessa atalanta) and Satyr Anglewing (Polygonia satyrus) larvae are usually solitary, and fold their leaves down (underside of leaf facing inside the tent).  Until this past weekend, I've only found a few Red Admiral larvae, and frequently come across Milbert's Tortoiseshells, but have never seen any Satyr Anglewings.  I was thrilled to find two 4th instar larvae (out of 5; instars are larval stages before they pupate) in Schnebly Canyon, along with several masses of 3rd, 4th, and 5th instar Milbert's Tortoiseshell caterpillars.  The next day I traveled up Reecer Creek to collect some nettle before heading home with my cat's, and found at least a dozen 3rd instar Satyr Anglewings.  I kept about five of them, so that I can photograph the different stages, the pupae, and the fresh adults.  Read my last blog post for more information about the trip where I found these little guys.

Posted by Caitlin LaBar at 8:59 PM No comments:

This weekend I had the opportunity to head over the hill into some nicer weather and see some butterflies. Usually I visit several locations along Reecer Creek/Canyon, but my parents and I have recently been exploring more of the Schnebly Canyon and Colockum Pass area, a few miles east of Reecer Creek. All of these locations are easily accessed by traveling north or northeast out of Ellensburg; almost any main road in that direction will take you up into the mountain range that separates Ellensburg and Wenatchee.
On Saturday, June 16, we took Fairview Road and made a loop up Schnebly Canyon, over Colockum Pass and back down Colockum Road. Sunday morning we ran up Reecer Creek for a couple hours, mostly so I could collect some more nettle for the Satyr Anglewing larvae I found on Saturday. We saw several fresh cougar tracks around some mud puddles in one spot, so we didn't stray far from the car! It was very windy on Sunday so there wasn't very many butterflies flying, and the ones that were were zipping by so fast it was often difficult to identify them. Between the two days, we saw at least 22 species (including the white/parnassian), possibly 23 if the fritillaries were different species.

Click on the smaller photos to see at full size. To help break up the quantity of photos, I'll post the Satyr Anglewing and Milbert's Tortoiseshell larvae photos in a separate blog entry. Thanks for looking!

Posted by Caitlin LaBar at 8:31 PM No comments:

The descriptions I gave in my previous post about the arctics made me realize that some of you may be wondering, "what in the world is a stigma?" and "where is the discal cell?".  While some terms such as margin and ventral are somewhat intuitive, other terms require some explanation for those of you who haven't studied bugs since you were two :-)
Using photos of the male Great Arctic from the last post, here is a general overview of the terms you will see me frequently use.  Click on the photos to view them full-size. 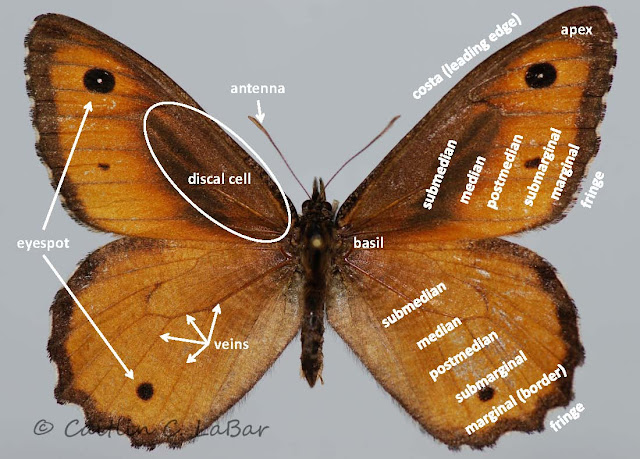 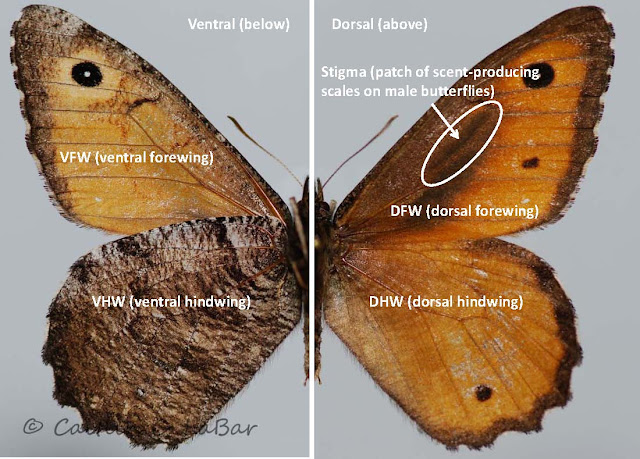 Update 1/6/2013: I added a separate page to my blog that goes into a little greater detail, see the page Wing Terminology.
Posted by Caitlin LaBar at 9:11 PM No comments:

Year of the Arctics

The genus Oeneis, a group of butterflies called "arctics", have a two-year life cycle.  Although some species appear to fly every year because of alternating populations, other species only fly every other year, with occasional sightings in "off" years depending on the location.  In Washington, the even-numbered years are when most Oeneis populations emerge as adults.
Washington is home to four species of Oeneis: Great Arctic (O. nevadensis), Chryxus Arctic (O. chryxus), Melissa Arctic (O. melissa) and Macoun's Arctic (O. macounii).  The range of the latter two is primarily in Canada and only slightly dips in Washington along the border.  Chryxus Arctic is also primarily found in the northern counties, with small scattered populations in other parts of the state.  The Great Arctic is found throughout the Cascade Mountain Range, from British Columbia to northern California.
Arctics are sexually dimorphic (males and females have slightly different markings).  Chryxus, Great, and Macoun's arctics are very similar, particularly the females, making it difficult to differentiate between the three species.  If you plan to spend time in the mountains this summer, watch out for these brown beauties on the roads - they love to bask in the sun and are perfectly camouflaged against the rocks and dirt of forest roads! In the event you plan to visit Okanogan, Ferry, Stevens or Pend Oreille counties, where the Great Arctic gives way to the Chryxus Arctic, here is a guide to determining which species you see:

Great Arctic - Oeneis nevadensis
Overwintering Stage - 1st winter as mid (2-3) instar larva, 2nd winter as final (5) instar larva.
Wingspan - 50 to 67 mm
Male - dorsal is golden orange with large dark brown discal cell and stigma.  Dark wing margins are flecked with white, creating a scalloped appearance.  One to three eyespots on FW and one on HW, on both dorsal and ventral sides.  VHW heavily mottled dark brown, gray and white.  VFW is similar to but lighter than DFW, with gray and white mottling near the apex.
Female - DFW cell lacks stigma and is not as heavily marked with brown; eyespots are usually larger with distinct white pupils.

Chryxus Arctic - Oeneis chryxus
Overwintering Stage - 1st winter as first instar larva, 2nd winter as late (4-5) instar larva.
Wingspan - 44 to 57 mm
Male - dorsal is light gold to deep orange-brown with large dark brown discal cell and stigma.  Dark wing margins are flecked with white, creating a scalloped appearance, but not as striking as the Great Arctic.  One to four eyespots on FW and one on HW, on both dorsal and ventral sides.  VHW heavily mottled dark brown, gray and white.  VFW is similar to but lighter than DFW, with gray and white mottling along wing margins and apex, more than Great Arctic.
Female - DFW cell lacks stigma and is not as heavily marked with brown.

Posted by Caitlin LaBar at 8:20 PM No comments: